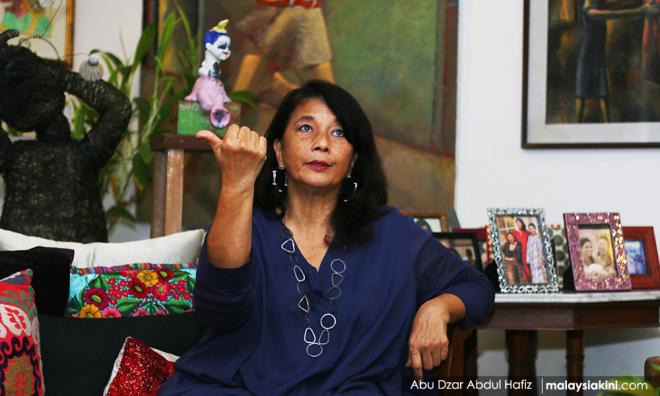 Marching to the beat of her own drum

MALAYSIANSKINI | Zainah Anwar's (above) tireless activism recently won her the United Nations Malaysia Award 2019 in recognition of her work in promoting the rights of Muslim women.

The UN award is just the latest in a growing list of global recognition, that includes Zainah being chosen as one of last year’s Harvard Law School’s 25 “Women Aspiring Change” in the areas of law and policy.

She is also one of the 10 Most Influential Muslim Women in the on-line International Museum of Women, a rather unfortunate placement, because if a museum is a place for ossified, stuffed, musty relics belonging to the past, she doesn’t belong there.

Uncowed, unfazed by authority and power, Zainah, with her fiery exuberance, is still tilting at Muslim patriarchal windmills, still storming the gates of entrenched small minds resistant to change.

Malaysiakini caught up with Zainah at her house in Medan Damansara.

Malaysiakini: When were the seeds of this contrarian spirit sown? What kind of childhood did you have?

Zainah: It was a great childhood. I had lots of friends. I grew up in a multiracial neighbourhood. I went to a multiracial English school. My father was extremely strict, but when it came to school we could do whatever we wanted - sports, extra-curricular activities. No restrictions… going out at night, yes, that was a no-no.

You went to a religious school?

I had 2 hours of religious school after school. I grew up with religion. I grew up knowing Islam, and I learned nothing bad in the name of Islam. It was about being a good person, good daughter, good human being, being kind, keeping yourself clean, honest, all those virtues and values. I had no problems with the religion at all.

The misogyny I saw, the way women were treated - I knew it had nothing to do with Islam, but it’s culture and tradition, it’s patriarchy.

A teacher characterised you as “too high spirited, too playful, too talkative, too naughty.” In a newspaper interview, you described yourself during that period as “a non-conformist, a disobedient child.” How did that come about, that unrestrained spirit?

(Laughs) I supposed I had been brought up with knowledge. My father (Zainah’s father was Anwar Abdul Malik, personal secretary to Onn Jaafar and credited with giving Umno its name) read voraciously … anywhere he sat was a mess, in his rocking chair by the front door, upstairs by the radio, by the bed, everywhere a mass/mess of newspapers and magazines, books and dictionaries, so I grew up with a reading culture. He had three daily newspapers, and he took hours to finish them.

I grew up with the BBC radio news which he listened to every hour on the hour. I have picked up that habit. I can listen to the news again and again. I hardly watch TV, but I love the radio. There was Time magazine, Life magazine, Reader’s Digest, Mustika, Dewan Masharakat.

My schooling and upbringing opened up the mind to the whole world, to have a curiosity about what’s happening in the world, and why it was happening.

That’s why you became a journalist?

I was single-minded in wanting to to be a journalist, having been exposed to politics in my youth. I read all about the Kennedys. I was fascinated by that family.

I found Form 6 boring. I didn’t want to continue studying. I wanted to work.

My mother was determined that I further my studies. Then she read in the papers that ITM was starting a journalism school, so I applied to ITM to study journalism. At that time ITM did not have a good reputation. Those who got a Grade 3 would go to ITM, and I had a Grade 1. Even the guy who interviewed me asked, “Why are you applying to ITM? Finish your Form 6 and go to a university.”

So your contemporary was Ibrahim Ali?

(Roars with laughter) He was my bloody classmate. The horror! The horror!

After ITM, I went to do my Masters in Boston University (1975-1977). I was under a Young Lecturers scheme, and I was supposed to teach when I came back, but I did not like it, so I broke my contract and I had to pay the government tens of thousands of dollars.

Ah, one of the early defaulters.

Where you developed a reputation as a difficult journalist.

(Laughs) I would ask difficult questions. People would say, the prime minister is angry with Zainah. (Laughs) So the PM was angry, what’s the big deal?

I guess I was not scared. I grew up not scared of any authority. My father was a patriarch. He was born in 1898, so his word was law. I was the only child who dared to challenge him, to question him.

How did he take it?

Well, he didn’t scold me. (Laughs) He smoked his cigars, his daun. If the ashtray was not by his side, he’d just flick the ash on the floor, so I scolded him. Why are you doing that? You are behaving like a little kid. My mother’s favourite line to me was “I say one word to you, you say 10 words back. (Laughs)

You say you didn’t like academia, then you left the NST go to do a second Masters.

I didn’t like teaching, but I loved studying. I loved lectures.

You didn’t like teaching, but for the past three decades, you have been lecturing - or should the word be “hectoring” - Muslim men about their treatment of Muslim women.

It’s not an invention of the feminist movement - the issue of justice, of compassion. The Quran talks about man and woman being each other’s garment, a relationship of love and compassion.

There is amazing, sophisticated jurisprudence, Islamic legal tradition about public interest, about choosing the best opinion among various opinions in order to do justice, to order to serve the public interest. Why are you ignoring this to bring about justice?

Why this fear of diversity? The tafsir tradition the fiqh tradition is filled with diversity and yet you ignore it to perpetuate your authoritarian rule. It’s about people wanting dominance, wanting control, power only for themselves, and the convenience of using religion to silence opinion.

That’s why I ask Westerners, why do you expect democracy to develop in the Muslim world. You are supporting all these dictators in the Muslim world. Without democracy in these Muslim countries, don’t expect Islam to be a democratic, progressive religion. It cannot thrive within a dictatorship that doesn’t celebrate, doesn’t welcome, doesn’t tolerate differences of op[inion.

Then you also have people who are poorly educated, with no sense of curiosity about learning more, learning something different, who want to break out of the stranglehold they are in.

The rural folks, the less educated don’t know better. What about scholars, lecturers?

We have had interaction with the learned, academics, but they don’t want to speak out in the public space. They fear being sanctioned by the university authorities, sanctioned by their colleagues. Asians in general, Malaysians in particular, Malays even more so – we have been conditioned to follow authority, to be obedient to our parents, teachers, husbands.

The pedagogy of education is to question. I remember when I went to Boston I wrote a paper, a literature paper, I can’t remember on what, and the teacher said, I never thought about that. No teacher in Malaysia would ever admit to a class that your thinking or your analysis is new to him or her, and that it’s welcomed.

This is the tragedy of Malaysia where the education system has done our young a disservice. It’s not that they are stupid. It’s they were never given the opportunity to reach their full potential.

The rich send their kids to private schools. My 9-year-old grand-niece is in Garden school. They get to choose a novel and the next day they have to discuss it in class. Is it a mystery? An adventure? Is it a comedy? Why? To help them analyse and understand what they are reading, they are asked to justify their thoughts.

When Emma Watson gave her speech at the United Nations on feminism - the school that my grandniece went to, they had to discuss Emma Watson’s speech. I asked my colleague whose daughter was the same age in a government school, did they discuss it. Of course nothing, whereas in my grandniece’s school, 10-, 11-, 12-year-olds in her school declared they were feminists because Emma Watson said she was a feminist. They Googled feminism, they wrote a paper on feminism.

How important an influencer is, like Emma Watson with millions of fans, that when she says she is a feminist, many young girls have the courage to legitimize what they feel, what they want for themselves

Where is that modeling in Malaysia? I would love Siti Nurhaliza to declare herself a feminist. Of course, she will be attacked, as Emma was by horrible people. She talked about removing herself from social media because of all the horrible attacks, but she said I can’t because I have followers all over the world who live isolated lives and who find what I do an inspiration. Trolls? That’s the price you pay.

The deviant liberals in Sisters in Islam have had more than their share of flak. What about the fatwa hanging over SIS?

We are not going to take it lying down, but for young people new to activism, it is a worry. Their families are not necessarily supportive of their work. We have staff who don’t tell their boyfriends and families that they work for SIS. They see the noticeboard in their surau about a ceramah about SIS being a liberal, deviant organization. They keep quiet. They don’t tell their neighbours.

Not everyone has the courage to stand up in a public space, to challenge, to confront dominant public opinion that’s Intolerant, conservative, misogynistic, and using Islam and God to justify misogyny and discrimination.

How dare you call us deviant when the work we do is in the name of God too, except we have a different understanding of God’s words. We are talking about an Islam that is just, that is compassionate, an Islam that is merciful. We use verses from the Quran to support our work. We are trying to be good Muslims.

What the fatwa is trying to do is to silence a difference of opinion. It is undemocratic.

Then I will be damned if I will keep quiet.

We feel in any society, values and attitudes do matter to influence law and policy, but it must be open to debate. You cannot say you want to use Islam as a source of law, and then shut the debate because only your understanding of Islam matters.

Because in the end, what do you want to do with Islam and Islamic law? Is your objective to bring about a better society, a more compassionate society, a more just society? Or you want you want to use Islam to entrench your privileged status in life, to entrench your entitlement, your position as a man, to justify your power and your privilege and not want to deal with the injustice of your power, your privilege, your entitlement, and its impact on women - the injustice and discrimination, the oppression of women in the name of God?

So just deal with the fact that you will be forever challenged as long as you perpetuate injustice and discrimination.

As long as Zainah Anwar is around…

Wong Yan Ke - the rebel in the spotlight

Teacher Sam flies off to the US, vows to be back