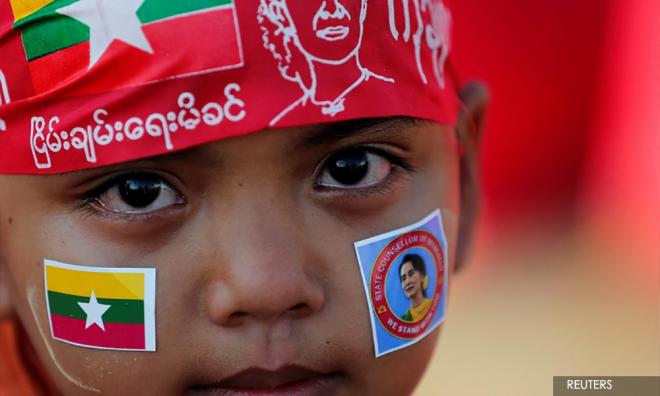 As Myanmar leader Aung San Suu Kyi prepares to travel to the Netherlands to fight charges of genocide against her country at the International Court of Justice, her supporters have embarked on an impassioned publicity campaign.

Suu Kyi’s reputation overseas has sunk to its lowest ebb over the treatment of Rohingya Muslims, but the Nobel Peace Prize laureate enjoys overwhelming support at home, where her image is undented by accusations of complicity in atrocities.

On Sunday, several hundred people gathered in downtown Yangon for the third in a series of rallies organized by supporters since the announcement was made that she would personally fight the charges.

“Aung San Suu Kyi is the bravest leader in the world,” Saw Phoe Kwar, a reggae singer known for his hits ‘Love Each Other’ and ‘Stop the Hate’, told the crowds, who waved flags and chanted.

“We must show our unity,” said protest organizer Aung Thu. “If a country’s leader says a lemon is sweet, we have to say it is sweet.”

More than 730,000 Rohingya Muslims have fled to neighboring Bangladesh since a 2017 crackdown by Myanmar’s military, which UN investigators say was carried out with “genocidal intent”.

Gambia, a tiny, mainly Muslim West African state that has the backing of the 57-nation Organisation for Islamic Cooperation (OIC), lodged a lawsuit last month against Myanmar for genocide, including mass murder and rape.

Suu Kyi’s office said she would fly to The Hague for the first hearings, from Dec. 10, to “defend the national interest of Myanmar”.

Though the rallies organized by her ardent supporters have been modest in size, there are other signs that Suu Kyi (below) has gathered popular support through her decision.

Recent days have brought a revival of an online ‘Stand with Daw Aung San Suu Kyi’ campaign, with Facebook users changing their profile pictures to images of the state counselor.

The campaign first went viral at the height of the 2017 violence.

Pencilo, a popular social media influencer, implored her 1.1 million Facebook fans to join her on a group trip to The Hague, using a travel agent offering discounted tickets.

Across Myanmar, the Rohingya are reviled as illegal immigrants from Bangladesh although they can trace their ancestry back hundreds of years, and allegations of atrocities against them are widely disavowed as fake news.

It is the one issue that has united the civilian government and the military, which ruled for half a century before Suu Kyi won an election by a landslide in 2015.

Last week, her government said it was “heartening to see that people from all walks of life ... are expressing their strong support for the State Counselor and her leadership in the endeavours to contest the case at the ICJ.”

Yangon-based political analyst Khin Zaw Win said Suu Kyi was garnering support by using a familiar script of “evil forces out there ganging up on the brave, heroic leader”.

Other dissenting voices come from Myanmar’s myriad ethnic minority groups, who have criticized Suu Kyi – from the Bamar Buddhist majority – for failing to keep a promise to end fighting with armed groups seeking greater autonomy.

Fighting in the borderlands has escalated and groups such as the Shan and Kachin also accuse the military of atrocities.

Three of the most active ethnic armed groups released a statement supporting the ICJ investigation, while the chairman of another, the Karen National Union, repudiated reports that they had agreed to support the government.

“The situation that Rohingya are facing is the same situation Karen experienced long ago,” the group’s former vice-chairwoman, Naw Zipporah Sein, told Reuters. “The military did that to the Karen. Now the military has done it to the Rohingya.”