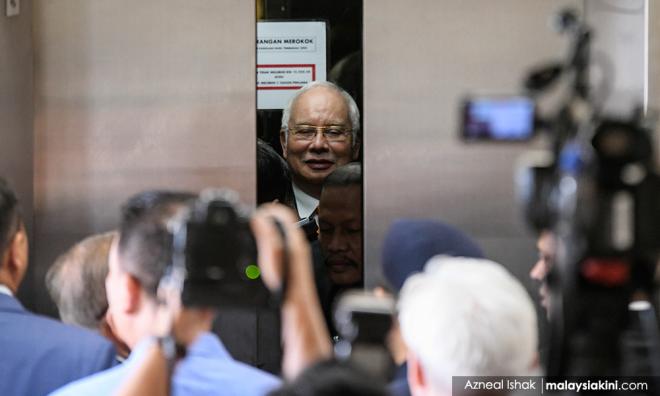 YOURSAY | ‘If Najib did not think the monies came from SRC, where did he think it came from?’

Clever Voter: Former prime minister Najib Abdul Razak’s “I don’t know” defence is probably the best response given the odds stacked against him. This is no different from the refusal to admit his alleged wrongdoing, which is to be expected.

If this is taken as true, it reflects very badly of the governance and integrity of the environment he created.

Dizzer: This strategy is known as implausible deniability. I suspect Najib may not know a lot about the matter, but he (and especially his missus) knew exactly how much was coming into the bank account and that it was illegal.

This is the inevitable end product of an entitlement mentality that has been institutionalised for 40 years.

FlabberPro: Najib is apparently feigning ignorance although he was the finance minister at material time.

What is going to happen next? His hotshot lawyer (Muhammad Shafee Abdullah) will claim injustice, lack of resources, lack of time, and an unfair trial, while Najib will cry shock should he be found guilty as charged.

It is costing everyone a fortune but in years to come, we will look back on you as being special. Why? Because you went so extensive on being bad that in the end, you sickened even your most loyal supporters.

At GE14, they joined with other decent Malaysians and showed the world that they do not have to tolerate such behaviour from their elected leaders. You should be proud, Najib, because you and your "friends" created that special moment in history.

Lovemalaysia2: This is the same strategy used (so far successfully) by former chief minister Abdul Taib Mahmud in Sarawak.

There is no evidence to show he gave instructions to his cronies in their business dealings but Taib allegedly got the money.

Najib’s associate Jho Low also had dealings with Taib so he probably took note of that and used the same strategy when it came to Najib.

Anonymous_1533094668: I am shocked why so many Santa Clauses want to deposit money into Najib’s bank account wherein there are millions of other bank accounts.

I am shocked that millions of ringgit were spent using Najib’s account. I am shocked how come “scammers” dare to use the prime minister’s bank account instead of that of a layperson.

Najib: Insane for me to willingly take SRC funds

Malaysian-United: Even if Najib had no idea where the money came from, which is as unlikely as a bluefin tuna living on dry land, there is still the issue of criminal negligence.

Najib, being the chairperson of SRC, the finance minister, and most significantly, the PM of the country, must be made accountable for this grave "oversight".

But it's abundantly clear there was no oversight on his part and he allegedly knowingly and intentionally participated in the devious scheme to defraud the company, and by extension, the Malaysian people.

Beman: "Looking at the situation, it does not make sense (tidak masuk akal) and it is insane (tidak waras) for me to agree and willingly accept money from a company owned by the Finance Minister Incorporated into my personal bank account," said Najib.

Not insane if you thought you could get away with it with the power you had.

Quigonbond: Indeed, Najib, it's hardly insane if you think you cannot be touched.

Pakatan Harapan only needed less than a year to put together all the evidence required to prosecute you, while you have been given years to investigate or come clean, which you have failed.

Oxymoronictendencies: Insanity aside, Najib has yet to explain why once he knew SRC funds had been deposited to his account, he made no effort to repay the money.

And the whole Malaysia knew about it by 2015. Ignorance is no defence under the law. Are we to believe we had an insane PM and finance minister for some four-plus years! That’s a stretch.

Sarawak4Malaysian: Najib, your defence is a bare denial? Not even a civil servant with below-average intelligence will believe you.

If you did not think the monies came from SRC, where did you think it came from? You are like the Malaysian girl in Australia who wrongly received monies in her bank account and spent it.

A reasonable person would have found out how the monies got into his or her account. And you are were the PM and finance minister!

Anonymous_1552707885: The court is not in the position to determine what you would or would not do in any situation but will only decide on what you had done in your capacity as prime minister and finance minister.

You can't claim ignorance when you have so much control of the 1MDB affair.

Clearwater: Those whom the gods wish to destroy, they first make mad.

You, Najib, was “insane” with greed and lust for power. You did not think your nefarious deeds would come back to haunt you. You thought yourself invincible and beyond the laws of the land.