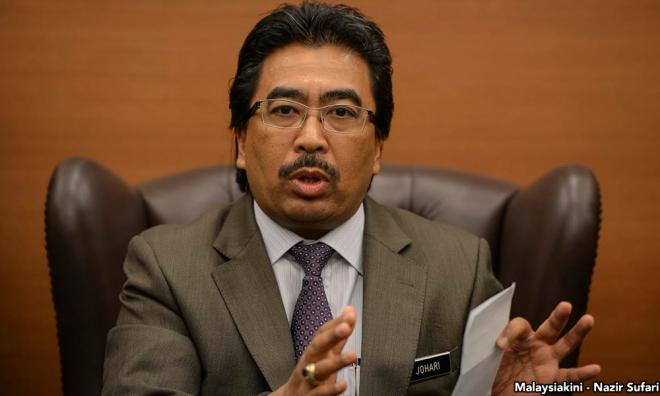 Former finance minister II Johari Abdul Ghani censured A Kadir Jasin over the latter's scathing response to his article on the nation's economic woes, which touched on the transition of power between Prime Minister Dr Mahathir Mohamad and PKR president Anwar Ibrahim.

He also responded to the veteran journalist implicating him in the transfer of assets in Felda and FGV Holdings Bhd during the previous administration.

Johari noted that Felda had filed a police report regarding its deal with Indonesian firm Eagle High Plantations (EHP).

"At this stage, it is suffice to say that I was not a party to the transaction.

"As everyone knows, Felda was not part of my portfolio when I served as finance minister II for the period of 21 months.

"If it was, I don’t think that this deal would have gone through," he added in a statement.

In its police report lodged in April this year, Felda alleged that it overpaid for a 37 percent stake in EHP.

Its general manager Othman Omar claimed that the price was deliberately inflated by almost 450 percent to RM2.3 billion when it was valued at only RM440 million at the time of purchase.

Based on feedback from market, industry players

Meanwhile, Johari said his article, published in The Edge on Dec 21, which ruffled Kadir's feathers was based on the views from stakeholders.

"My opinion piece entitled 'What ails Malaysia?' on the possible factors which have led to the nation's current economic uncertainties, were basically based on the feedback that I received from the market and industry players.

"Regrettably, a renowned seasoned journalist, who is also a media advisor to the government, seems to have taken my opinion very personally in his (blog) posting,” he added.

As the person tasked with advising the prime minister on media and communications, Johari said Kadir should “respond to arguments intellectually.”

Stressing that he is entitled to his opinion, the former minister also said he has never undermined any of the Council of Eminent Persons (CEP) members.

Kadir, who described Johari as member of the cabinet during the "kleptocracy reign" of Najib, castigated him for blaming the poor performance of the stock market on the uncertainty over the transition of power issue.

The veteran journalist, who was a CEP member, likened this to "hiding in murky waters."

Blaming Najib for Malaysia's debt, he said: "Who is the one who caused the government to have so much debt except Najib who is his (Johari's) own boss?"

In his article, Johari questioned the decision-making process in Pakatan Harapan, saying the business community is confused as to whether it is the Economic Affairs Ministry, Finance Ministry, Prime Minister's Department or CEP which called the shots.

Kadir claimed Johari could be uncomfortable with the consensus process because under BN all the power was in Najib's hands as prime minister and finance minister.

Apart from Felda, he also believed that Johari might be involved in the sale of Umno shares in Media Prima Bhd and other transactions involving UEM Sunrise Berhad and a luxury hotel in Langkawi.

Commenting on this, Johari said Kadir had taken his argument out of context.

"I do not know what his agenda was but what I know is that he has taken my opinion out of context,” he added.