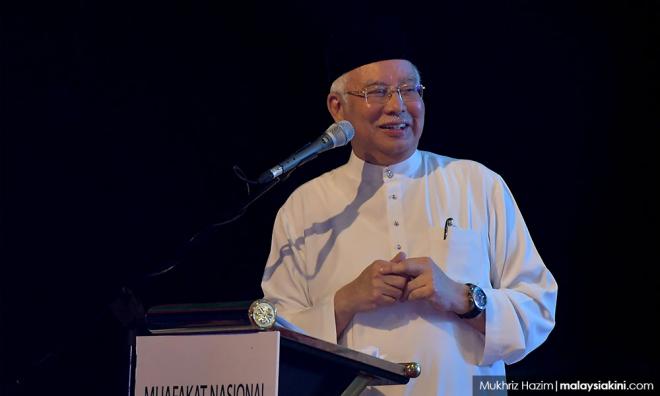 'Can I advise you something' on sex videos? Najib to authorities

Najib Abdul Razak has claimed that it is not difficult for the authorities to determine who were the individuals in the controversial gay sex videos, implicating Economic Affairs Minister Azmin Ali.

This was a swipe at the audio recordings which the MACC revealed yesterday of Najib's telephone conversations in 2016 with several individuals with regard to the 1MDB scandal.

One of the recordings was a conversation between him and his wife Rosmah Mansor, where the latter is heard shouting, “Can I advise you something?”

“During their 'action' in the videos, the TV volume was turned up high. The CCTV recording from the hotel was also submitted to the authorities.

“The time can be checked. Who entered whose room in the CCTV recording and compare this with the time the particular TV show was aired in the videos,” he added.

The former premier was responding to attorney-general Tommy Thomas' statement that there would be no prosecution with regard to the video since the identities of the two men cannot be established.

'Poor Haziq must be dumbfounded'

Najib pointed out that former Santubong PKR chief Haziq Abdullah Abdul Aziz had admitted being the person in the video as well as who his partner was.

“Or did Haziq lodge a false police report?” he asked.

“But poor Haziq, with the AG's announcement, he must now be wondering who he was with during that memorable night (malam penuh kenangan). Surely, he must be dumbfounded,” he added.

Najib also suggested that the hotel manager might need to “samak” (act of purification) the hotel room after the AG's announcement.

In Islam, samak is performed when a Muslim comes into contact with a dog or pig.

The videos first surfaced on June 11, 2019 when they were leaked to members of the media through Whatsapp groups.

The next day, Haziq released a video in which he confessed to being one of the men in the video and alleged that the other person was Azmin.

He claimed that their sexual romp occurred at the Four Points Hotel during the Sandakan by-election in Sabah last year.

Azmin, who is also PKR deputy president, had described the videos as an attempt to ruin his political career and was convinced that it was an inside job.

In a separate statement, lawyer Haniff Khatri (above) had questioned whether the AG would bring charges to others who were involved in the sex video case.

Among them would include Haziq, who had admitted to being one of the individuals in the video, he said, for sexual acts against the order of nature or conspiracy or false accusations.

He also asked whether any charges would be brought against those who created and spread the video with the intention of exposing pornographic material to the public.

“It is extremely important that any criminal investigation must resolve all its issues and all concerns raised,” Haniff said.

Meanwhile, fellow lawyer Andy Yong said in another statement that the AG should consider whether the opinion of an expert witness in facial recognition was even necessary in this case.

“A judge may be able to form their own opinion as to the similarity between the face of an offender from video footage and that of the suspect obtained by the police on an arrest.

“There may also be no need for facial mapping, where a witness purports to be able to recognise someone well-known to them from a visual image, even if that image is not suitable for enhancement,” Yong said.

It is only when the image is such that a judge cannot reach their own conclusion, then the opinion of an expert in facial mapping or recognition would be required, he said, adding that there are several cases in the United Kingdom with this precedent.

He also pointed out that forensic evidence supplied by an expert witness is usually treated as circumstantial evidence.

In this case, Yong reminded that one of the individuals implicated in the sex video holds an important government post.

As such, for the sake of public interest, he said he hoped the AG would reconsider his decision not to press charges against anyone with regards to the video.