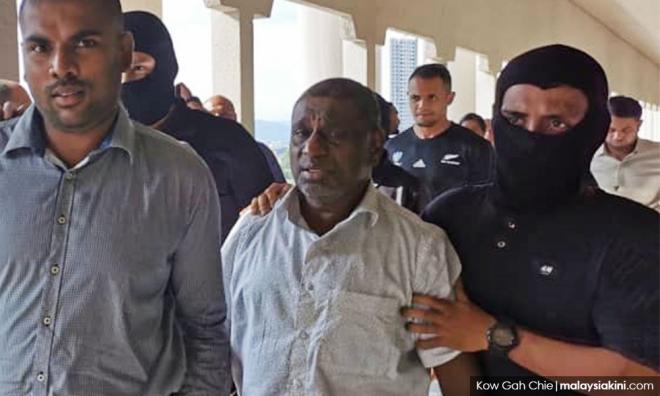 As time passed, and as I heard one judge after another speak, it appeared to me that this whole Sosma trial was just a circus, keeping the media and public entertained.

They wanted to know if they were bound by an earlier landmark decision by Justice Mohd Nazlan.

They also seemed to indicate that the earlier High Court decision was not binding on them because their status was the same and that they would only be bound by a decision made by a higher court such as the Appeals Court or the Federal Court.

The sad truth was some of the detainees were told that they would be released today and had high hopes. They even packed their belongings in prison.

Those hopes were dashed as the courts once again mitigated on the question of law surrounding Section 13 of the Sosma Act.

Ramkarpal Singh, the lawyer for the detainees, looked tired as, like all of us, he had to move from court to court as well as keep reassuring the families that all efforts were being made to secure the release of their loved ones. But the road to freedom was not smooth.

On Nov 29, 2019, Justice Mohd Nazlan Mohd Ghazali made a landmark decision in the High Court in Kuala Lumpur, granting Saminathan approval to seek bail. Previously, Section 13 of Sosma had prohibited the judiciary from considering bail.

The brave judge made a declaration that Section 13 is unconstitutional because it violates the separation of powers among the different branches of government.

This means the AG considers Section 13, which denies bail under Sosma, unconstitutional. Tommy was quoted as saying, “What the drafters of Sosma and the 2012 Parliament that enacted the law did not take into account was that the judicial function of the courts is eroded by Section 13. Consequently, judicial power is undermined.”

To a question on whether that meant bail will be granted automatically because of this judgment, Tommy Thomas explained that empowering the judiciary to consider bail did not translate into automatically granting bail as the judges possessed the wisdom to determine when to do so.

All this is nice to hear, but yesterday in the courts the reality was disappointing. Ramkarpal argued that since Yang Arif Mohd Nazlan Ghazali had granted a declaration and since the AG was not going to appeal, therefore Section 13 was unconstitutional.

Sadly, it looked like all three judges wanted to depart from the landmark decision as well as the position of the AGC. The prosecution and the defence in this case both agreed that Section 13 was unconstitutional, yet the presiding judges didn’t seem to agree.

What was even more sickening was, when Ramkarpal submitted on why bail should be granted for Gunasegaran, the AGC, represented by deputy public prosecutor Mohd Saifuddin Hashim Musaimi, argued very strongly that Gunasegaran should not be granted bail.

This is a clear indication that the DPP and the AG seem to have a different take on the same matter.

It is my own conviction, looking at all this, that this whole Sosma arrest is a circus and a drama. Now the drama has moved to the courts. Initially, after the Pakatan Harapan leaders met Prime Minister Dr Mahathir Mohamad on this matter, it appeared that Mahathir was upset with the arrest and was determined to amend the Act.

What is certain is that as we mark the 100 days of detention this Saturday, the 12 Sosma detainees will be denied bail and their freedom.

PSM calls for the AG and his DPP to have a clear position on Section 13.

PSM also calls upon the Harapan government to end this drama and circus once and for all by repealing the Sosma Act. This is nothing extraordinary as it was in their manifesto.

Harapan should repeal this draconian law in the next Parliament sitting in March 2020. Anything short of that can only be interpreted as Harapan happily continuing the detention without trial practice of the former BN regime.