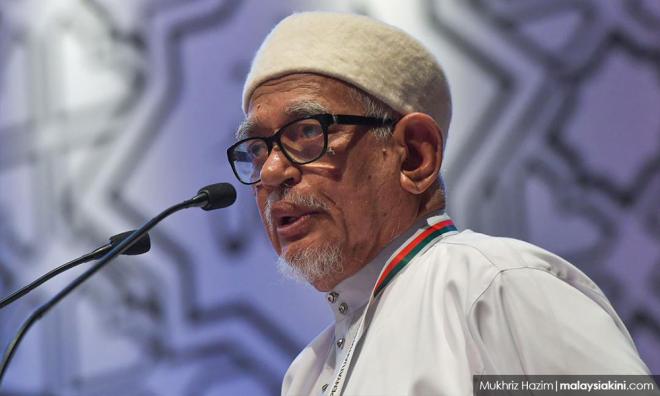 The transition of power between Dr Mahathir Mohamad and Anwar Ibrahim is not as simple as changing bus drivers, said PAS president Abdul Hadi Awang.

Hadi (photo) said as Muslims, the transition must also fulfil any conditions set for the agreement.

"You can't just promise to hand over power... if it doesn't fulfil the conditions, doesn't meet the terms of agreements, then it is not valid. So we have to see whether the conditions have been met.

"We can't assume that changing the country's leadership is like changing bus drivers.

"Even if you want to change bus drivers, if you're heading to Kuala Lumpur you need a driver who is headed there too... if they're headed to Penang, you can't, (the bus) won't reach its destination," Hadi said.

He added that the government should be focusing on fulfilling its election manifesto instead of fighting over the transition.

He said this when met by reporters at Rusila in Terengganu today.

Despite repeated promises from Mahathir that he will hand over the reins to Anwar, the transition has been a constant source of speculation throughout the Harapan administration.

DAP secretary-general Lim Guan Eng revealed that Mahathir has set a transition timeline, adding that the Pakatan Harapan presidential council will announce the actual transition date when the time is right.

Anwar, meanwhile, has called for the coalition not to squabble over the matter in public.

Meanwhile, Hadi reiterated that PAS was not joining the Harapan government, in response to queries about his recent meeting with Mahathir.

"I didn't meet him to ask to join the cabinet, no need to get befuddled. We didn't ask to join the government," he said, adding that they just discussed matters concerning Kelantan and Terengganu.

Previously, Terengganu Menteri Besar Ahmad Samsuri Mokhtar, who was also present at the meeting with Mahathir, said there was nothing fishy about the incident.