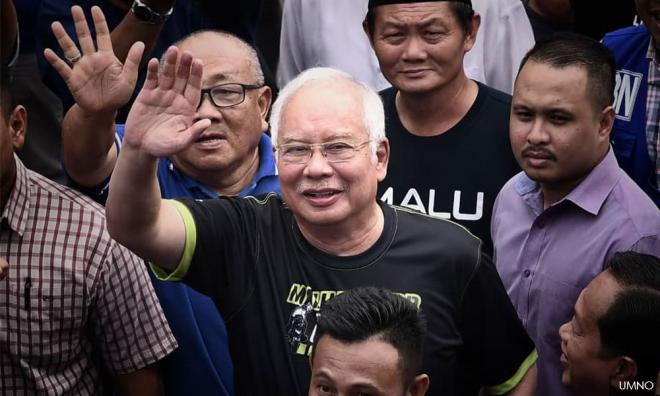 Najib: By-election wins no guarantee of success in next GE

Former BN chairperson Najib Abdul Razak today cautioned that while the opposition coalition is enjoying a winning streak of five out of six by-elections, this is no guarantee of a victory in the next general election.

While the recent wins had boosted BN’s confidence, the people need to be convinced further and that's why the coalition needs to present an attractive alternative government, the former prime minister said during a walkabout at Pokok Sena, Kedah, according to a report by Free Malaysia Today.

“That is why we are trying to develop a national consensus (Muafakat Nasional) which is a cooperation between Umno and PAS.

“If this narrative convinces the people, we will be successful in getting our other partners such as the MCA and MIC to support the Muafakat Nasional initiative.

But it would be wrong to assume that recent wins in the by-elections would reflect in the next general election, said Najib who is also MP for Pekan.

“Places where we were told we couldn't win such as Tanjung Piai and Kimanis, we walked away with higher majorities,” said the man who helmed the country from 2009 to 2018.

Asked about Prime Minister Dr Mahathir Mohamad's warning that Harapan would be likely a one-term government unless infighting ceased, Najib said this was likely meant to affect changes within Harapan.