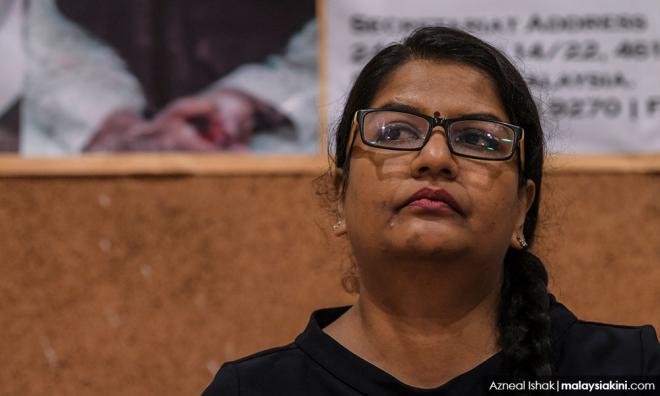 YOURSAY | ‘There is no happy ending here. There is only justice that must be served.’

Now the police chief says he knows where the daughter is but is not arresting the father and returning the daughter to her mother in compliance to the court order. He urges the mother to be patient as he wants a happy ending for the father, the mother and the daughter.

The inspector-general of police (IGP) fails to understand the purport and effect of the order of court. He does not have the discretion of substituting his feelings into the matter for the peremptory order of the court.

The mother has suffered the illegal abduction of the daughter and the separation for 10 years. Bring the daughter to the mother now, IGP.

Anonymous_1543475877: David Dass, are you not afraid of a serious consequence like the Maria Hertog case in Singapore. We are dealing with a highly sensitive case involving Islam.

The IGP has to move cautiously. Give him some room to manoeuvre.

Vijay47: It looks like the whole world should stand still for fear the Malays would do their thing and run riot.

It is unbelievable that the IGP, the person in whom a whole nation would place its entire confidence for the protection of law, can now brazenly admit that he has refused to comply with an order of the court.

I cannot find the appropriate words to describe my utter contempt not only for Abdul Hamid Bador but also for the previous two IGPs and in fact the entire government machinery.

Abdul Hamid, just who do you think you are that you have some divine right to act as your fancy takes you, to blatantly disregard an edict from the court? Yours is to enforce the law, to execute court orders as the judiciary may issue.

You are not a marriage counsellor for you to embark on frolics to devise a win-win outcome for a criminal. Are you subscribing to a mutated Abdul Hadi Awang-Zakir Naik credo that the interests of a Muslim convert, however putrid he be, supersedes the wellbeing of a Hindu woman?

Perhaps from your proud confession about knowing K Pathmanathan’s whereabouts, we can infer that you are also fully aware of the fate that befell Pastor Raymond Goh, Amri Che Mat, and Joshua Hilmy and his wife Ruth.

Indira Gandhi, I cannot claim that celebrations are in order. No, the night is still dark, you are still deep in viperous woods. Yet there is now a glimmer of light, after years of forsaking you, hope seems to draw close.

The battle has to continue, but the enemy’s ramparts are eroding. And there now seems a bright chance that you will succeed in your suit against the IGP, especially in view of his admission.

KnockKnock: The snag is the girl had been brought up as a Muslim ever since her disappearance.

Being a Muslim, she is now under the watchful eyes of brother Muslims not only in Malaysia but around the globe. So to surrender her back under the care of her mother who is a Hindu is a very sensitive and serious matter.

An amicable win-win solution has first to be designed by both the parents' agencies or representatives so as to avoid unhealthy endings on both parties.

Pros and cons on this subject matter are obvious to all Malaysians, be they leaders, politicians or men on the street. All pray for an amicable ending once and for all.

Anonymous 2401191456463140: KnockKnock, you missed the point. Cut religion out of this reunion between mother and daughter.

Kangkung: IGP, it is not your business to bring a “happy ending” to the case. Your job is to arrest the kidnapper and bring him to justice. It the mandatory death penalty for kidnapping and that is how serious the crime is.

IGP, will you be so “kind, patient and magnanimous” if the perpetrator of the hideous crime were a non-Muslim father?

Quigonbond: The IGP's admission raises a ton of questions. Does the home minister know about this? Are they leaving it to him to come to a happy ending and washing their hands off? If that is the case, the entire Home Ministry is just as guilty.

And what happy ending are we even contemplating? Indira Gandhi can never forgive her criminal husband. The daughter who is more than a teen now should have been able to contact her yet she hasn't. Has she been brainwashed?

In which case, is the daughter already lost to her? How does one compensate for such a tragic outcome for Indira Gandhi? And knowing there is a criminal at large, the IGP has let this person live freely for so long.

If we are truly a nation of rule of law, the IGP should be jailed for such travesty of justice, and the husband should be charged and convicted for kidnapping. There is no happy ending here. There is only justice that must be served.

Hang Babeuf: What kind of silly game is the IGP playing? The Royal Malaysian Police (PDRM) and his IGP predecessors were and are under court orders in this matter. It is not for them to go haring off on their own schemes, following their own whims.

What they should be doing is respecting and following court orders. Rule of law? Or of police discretion?

Cogito Ergo Sum: By his own admission, the IGP is in contempt of the highest court of the land. The Attorney-General’s Chambers (AGC) must now charge the IGP for contempt. This is most ridiculous.

We voted out a diabolical regime and replaced it with another.