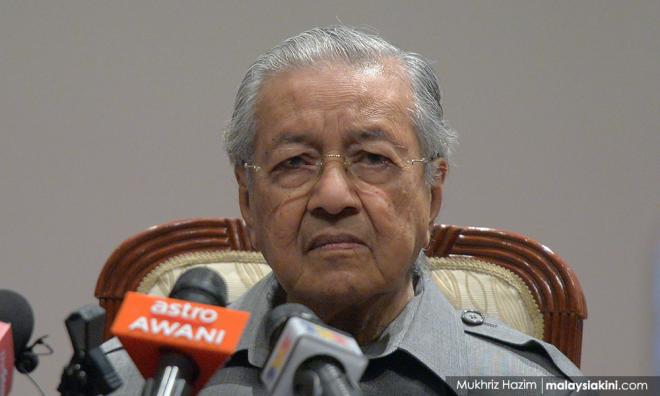 YOURSAY | Mahathir, look at what you have done

YOURSAY | ‘Had you kept your promise of handling the post to Anwar, M’sia will not be like now.’

When you were the PM, PAS supported you. They dislike PKR leader Anwar Ibrahim because of the ‘liwat’ (sodomy) cases. Of course now, they are all behind another allegedly ‘liwat’ man, former PKR deputy leader Azmin Ali.

Mahathir, ask yourself this question - do Amanah or DAP behave like them?

You owe every one of them, and all Malaysians who had voted for a better Malaysia, an apology. Because of your no confidence in Anwar taking over the PM post, you have sacrificed their dream of a better Malaysia.

Had you kept your promise of handling the post to Anwar, Malaysia will not be like now. Of course, your son will still be the Kedah MB.

If Anwar is incapable, Pakatan Harapan will lose in the next election. That's fine. But what is happening today - you think it is better than with Anwar as the PM? Indeed, look what you have done.

Anonymous 381541456985626: Mahathir, now you are getting your own medicine of rudeness and sarcasm which you throw at people who showed you love.

The rakyat respected your old age and gave you the chance to set things right. You ditched them by joining with PAS politicians and PKR traitors.

Now you are treated the same way you have always treated others. It is good to see you getting your dose of medicine from the people you had associated with recently.

PW Cheng: Mahathir, let me put this clearly to you. All this ‘maruah Melayu’ (Malay dignity) concept espoused by you will not stop the avaricious Malay leaders from robbing the country dry.

It is as plain as pikestaff. You started it and now the joke is on you. Remember the song by the Bee Gees?

Before we can ever think of making the country better, you must do a biological modification of the Umno DNA, without which all will come to nought.

Odysseus: PAS, a defender of Islam, please tell us where in the religion where an alleged thief can go free like former prime minister Najib Razak’s stepson Riza Aziz. We know Islam is a religion of compassion but how does it apply to Riza's case?

Will you allow everyone to walk out a free man if they return half of what they stole?

Jack: As a layman, such a plea bargain raises more questions than answers. It looks severely lopsided and gives the impression that crime does not pay. I am sure many thinking people will see the same way. It just doesn't look right.

It undoubtedly raises lots of suspicion as well.

Goliath: De facto law minister Takiyuddin Hassan is a chameleon who sings in the tune of who is on the throne.

If ordinary rakyat can smell the fishiness in this plea bargain deal, don’t you think you should muster up some of your intelligent cells (if any available) and see why this is all wrong?

Democrat: Such a shallow, unprofessional and dumb response to an issue which is shaking the fundamentals of our justice system.

The world is watching, the voters are watching. And all you have to say that Mahathir is a hypocrite? What kind of law minister are you?

Substantiate your retort with facts and professional argument. Not a one-word statement – hypocrite.

Anonymous_1544340881: You call a man whom your own leader in PAS had supported as PM a hypocrite.

That said, at least Mahathir articulated his reasons for his concern and confusion on this occasion; no doubt shared by many right-thinking Malaysians.

Aside from calling him a hypocrite, you did not explain the reasoning or rationale behind this.

Apanakdikato: This is not a surprise. Most people expect such plea bargains to be made as soon as Perikatan Nasional (PN) took over the government.

How else Prime Minister Muhyiddin Yassin would have garnered support from the Umno bigwigs, many of whom are beholden to Najib. Najib himself could have played a major but hidden role in the so-called Sheraton Move, through his many proxies.

That said, what is the difference between Mahathir and Najib? We know that Mahathir is not clean himself. His children too had wrongfully benefited from taxpayers' money as well as enjoyed lucrative business deals and even major bailouts.

Many Malaysians today, especially the non-bumiputeras, are left to fend for themselves. The racist rants and polarisation in society will only get worse, whether under PN or Harapan, because there is a lack of good and principled leaders in Malaysia.

PAS is basically a Malay and Islamic supremacist party. They are against non-Malays and non-Muslims in general, and PAS leaders have once said that when they come into power, they will "jentik" all the non-Muslims.

To PAS, it is a must to have only Muslim leaders in the government even if they are corrupt and incompetent. So it comes as no surprise why PAS is supportive of the corrupt going scot-free so long as they are Muslims.

VP Biden: Takiyuddin, you forgot to rope in DAP in your feeble attempt to deflect a valid concern in the rakyat’s mind even if it comes from Mahathir, who you lot were supporting just to get into government.

PAS which uses religion to justify its existence should take heed of its own ‘manifesto’, the Quran and hadith, on what it says about betrayal and hypocrisy.

Anas ibn Malik reported: The Prophet said, “Whoever has three traits is a hypocrite, even if he fasts, prays, goes to Haj and Umrah, and claims to be a Muslim.

“When he speaks, he lies. When he promises, he breaks it. When he is trusted, he betrays it.”

Roger 5201: So much for Malay-Muslim solidarity when one former chief justice famously ruled a Muslim does not lie.