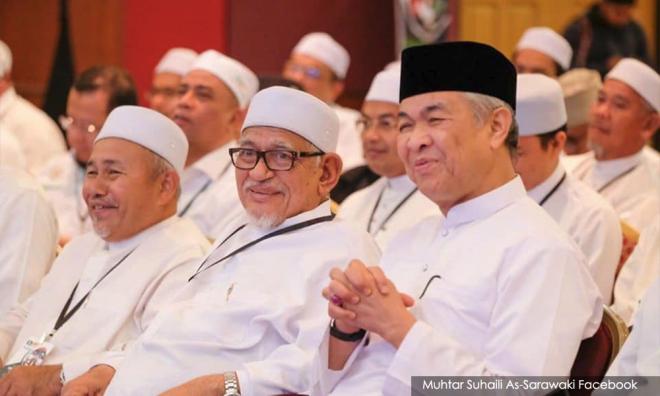 YOURSAY | ‘The signal is clear, certain factions in Umno and PAS are not in favour of a PN tie-up.’

Amid PN debate, Umno and PAS steam ahead with Muafakat Nasional

Despite PN's confidence, its fortunes are tied to last-minute Umno-PAS moves'

Bobby0: Let us face facts, above all these lovey-dovey scenes, there are serious rumblings going on inside the Perikatan Nasional (PN) coalition.

Former PKR deputy president Azmin Ali and his followers stood on a Pakatan Harapan ticket when they got elected. Those who voted for them were angry at Umno and its antics of corruption and arrogance.

In which direction will these voters go in the next general election? Has their anger been subdued now against Umno? Will they vote for the same candidates who promised the people that they would fight against corruption and abuse of power but later joined forces with those they were initially battling against?

The same applies to Bersatu but they have an additional problem. Some of them stood on an Umno platform. They won and then left to join Bersatu. Will the voters and Umno trust them again as to their betrayal?

Where does Umno stand with respect to Bersatu? Underneath all this false support for Prime Minister Muhyiddin Yassin and his people, Umno wants its position as top dog back. They would rather wait for the polls to speak for itself. How many seats will Bersatu win in the end to secure the no 1 post?

Will Umno also take the risk of seeing Bersatu rejected at the polls? This might result in many seats falling into the hands of the opposition. It might end up becoming the seats of Azmin and gang, putting Bersatu in danger and risking PN winning majority seats.

Bersatu and the Azmin group seriously lack grassroots support. They need time to rebuild. They cannot afford to go into the election battle now. But they might be in a better position perhaps in the two years after working the ground.

As a result, there is a lot of work at hand. The relationship at the top looks okay, but the three coalition members have their own agenda, including PAS.

Each is latching on to the other to advance their objective. Can they succeed? Only the results of the next elections will show the true position of each coalition partner.

Not forgetting that Harapan still has solid numbers in their camp. They will expose every wrongdoing all the way up to GE15, creating frustrations and unhappiness in the hearts of the voters.

Vote4changejohor: Yes, it is doubtful that Muafakat Nasional will sincerely support Muhyiddin as the PM after GE15 should PN win, especially when Umno wins many more seats than Bersatu.

With many differences between the three major parties in PN, the superficial willingness of all the PN parties to formalise a coalition is merely window dressing to prepare for GE15 and agreeing to have Muhyiddin be the PM is a matter of expediency. Many Umno leaders are still hesitant on this issue.

Milshah: It’s unlikely PN will be the future due to seat allocations. Let’s face it, apart from former premier Dr Mahathir Mohamad, Bersatu has nothing to offer.

By letting Mahathir go, Bersatu has lost its golden-egg-laying goose. Ironically, Harapan too has lost its Malay attraction by letting go of Mahathir in favour of PKR president Anwar Ibrahim, leaving Umno/PAS as the only alternative for Malay voters.

The utter defeat of Bersatu and Harapan in the next election is inevitable. At least Harapan still has the non-Malay voters, but they are a minority just enough for Harapan to be opposition and they have accepted this fate.

Conclusion? Umno/PAS for the win with Harapan as opposition.


RR: From the statement of Umno president Ahmad Zahid Hamidi, it is clear that Muhyiddin will not be supported as PM in the event of GE15.

But no worries for Muhyiddin for he has already served as the eighth PM of the country, a cherished ambition of any top politician. He will say enough is enough and fade away.

But what about the future of the country? Are there any corruption-free dedicated leaders available in PN to lead the country? Harapan is in a quandary with Anwar hated in his own coalition. It appears there must be divine intervention to save our country and rakyat.

Another possibility which should not be discounted is this - a hung Parliament after GE15.

Back to square one? Or the dawn of a new beginning?

Clever Voter: No one party can dominate but some see this as an opportunity to extract the maximum. Such unethical behaviour is bad for democracy.

Two different coalitions of different values, their purpose is to maximise on the value of their relationship. But the only clear message is that one is about Malay dominance and the other is truly Malaysian.

It doesn't take much intelligence to choose the appropriate one, but race and religion mislead voters and take the country further down the route to irrelevance and a failed nation status.

The Wakandan: Eventually, it will be between Muafakat Nasional and Harapan. The country is moving into a truly two-party system instead of being dominated by the autocratic Umno.

If GE14 is anything to go by, GE15 will see a tough fight. It won't be a walkover anymore.

The fate of Bersatu is in limbo and the strong parties in Sarawak and Sabah would be the ones who choose the winning side.

Daylight: The signal is clear, certain factions in Umno and PAS are not in favour of a PN tie-up. Bersatu will be played out just as it has done to Harapan. In the next GE, it’s back to three-cornered contests.

Just A Malaysian: We are heading for turbulent times. With so many Malay parties each professing to fight for race and religion and sounding quite the same, we will end up with each party big enough to party but not to be fully in charge.

"Sheraton moves" will be the flavour of the day. Coalitions will be formed and destroyed. Rakyat will be disillusioned and we risk social instability. Let's pray for good sense to prevail.