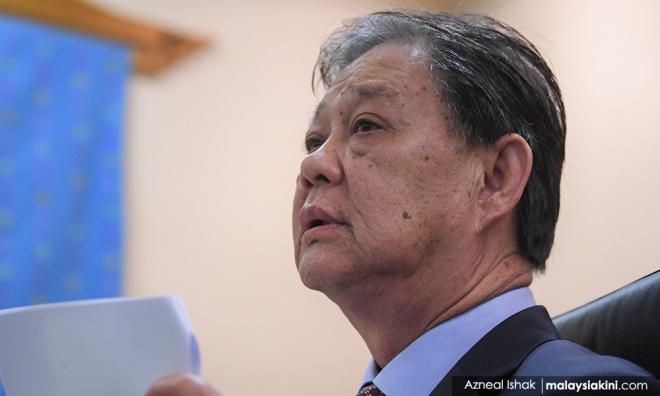 SABAH POLLS | Warisan, the party leading the incumbent coalition in the Sabah polls, suffered a self-inflicted injury at a critical period in its re-election campaign as early voting for police and military personnel begins today.

The injury was inflicted by the party's supreme council member Mohamaddin Ketapi, who also had a colourful tenure as tourism, culture and arts minister in the previous Pakatan Harapan government.

Mohamaddin had claimed gays didn't exist in Malaysia, said he was “too poor” to declare his assets when the then Harapan government made asset declaration compulsory and shot down a fellow coalition MP who raised concerns about child sexual abuse.

In his latest controversy, Mohamaddin, who is the Silam MP and also being fielded to contest the Segama state seat, claimed the armed incursion on Lahad Datu, Sabah by militants from the southern Philippines in 2013 was a "show" (sandiwara).

Two police commandos were killed during initial skirmishes in Lahad Datu and one army man was killed by sniper fire while sweeping for enemy combatants.

Another six police officers were killed in a separate ambush in Kunak, Semporna, around 150km away from the main conflict site. Some of their bodies were reportedly mutilated.

In that incident, militants had infiltrated Kunak and the police were lured into the village, believing they were dealing with regular criminals. Another military personnel also died in a car accident.

The conflict took place between February and March, two months before the 13th general election was called on May 5, 2013.

Mohamaddin had insinuated that the incursion was related to the then BN-led government to shore up its support in the general election.

These are security forces personnel who are on duty and more would cast their ballots on polling day itself, set for Sept 26.

Until then, Warisan still has four more days to mitigate the damage when the remaining 1.1 million qualified voters cast their ballot on Saturday.

While the security personnel vote is relatively small compared to the overall number of voters, the conflict had a serious impact on the east coast of Sabah, which is the power base of Warisan.

It led to the creation of the Eastern Sabah Security Command (Esscom) and a curfew from going out to sea during after-hours that is in force until today.

However, opponents have stepped up the criticism, accusing him of not being sincere after he claimed that his comment was "misinterpreted" and qualified his apology with “if security forces personnel were offended”.

Warisan president Shafie Apdal, responding to the controversy, said he will seek an explanation from Mohamaddin but hoped everyone would "move on" as he had apologised.

Until yesterday, Warisan's opponents Gabungan Rakyat Sabah (GRS) comprising BN, Perikatan Nasional (PN) and PBS, had been struggling to find their footing in the campaign.

Instead, they resorted to playing on anti-immigrant sentiment by branding Warisan as a "party of undocumented migrants".

The strategy had racial and religious undertones as the messaging was largely directed in non-Muslim bumiputera areas where there is lingering resentment over the mass influx of Muslim refugees and other undocumented migrants from the southern Philippines.

New fodder against Warisan and allies

However, Mohamaddin had provided GRS new fodder and already, the component parties are swinging into action, arranging a series of press conferences and police reports today in response to his comment.

The controversy has also raised concerns among Warisan's partners, particularly DAP and Amanah, which are contesting under Warisan's logo.

Mohamaddin is contesting in the newly created state seat of Segama. His main rival in the eight-cornered fight is Bersatu's Aljen Johnny who is contesting under the PN logo.

Campaigning began on Sept 12 and will conclude at midnight on Saturday.

The snap election was called after Umno's Musa Aman initiated a coup against the Warisan Plus government through defections in a bid to make a comeback as chief minister.

However, he was outmanoeuvred by Shafie who secured a dissolution of the state assembly, paving the way to fresh polls.