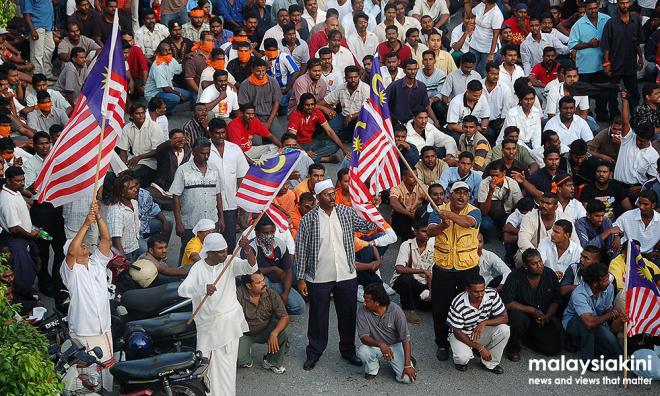 Hindraf has never been about only Indians

LETTER | Hindraf Makkal Sakthi chief P Waythamoorthy, according to Umno and PAS, is the only racist in the country. If he's racist, why did the then prime minister Najib Abdul Razak appoint him as a deputy minister in 2013?

Prime Minister Dr Mahathir Mohamad should ratify the International Convention on the Elimination of All Forms of Racial Discrimination (Icerd) as soon as possible.

The consensus in the court of public opinion is clear. The non-Muslim Orang Asal in Borneo and Malaya have consistently been denied the benefits of Article 153.

Putrajaya has not only consistently violated Article 153 but it has gone beyond into all walks of life and disrupted the life of non-Muslims. This has benefited only the ruling elite at the expense of the nation.

On the eve of Merdeka, Aug 31, 1957, the Malays in Malaya were subjects of the sultans, the non-Malays were British subjects. Both became citizens via the Federation of Malaya Independence Act 1957.

Borneo's Plight in Malaysia Foundation (BoPiMaFo) has been working with Hindraf, and Waythamoorthy in particular, on human rights issues.

Hindraf has never been about only Indians.

Hindraf's constituency has been, and continues to be, the 350, 000 stateless people in Malaya and the countless others in Borneo, the 850, 000 displaced estate workers in Malaya including non-Indians, the urban poor irrespective of race, the plight of the Orang Asal in Sabah Sarawak and human rights, the basis of international law.

The writer is president, Borneo's Plight in Malaysia Foundation (BoPiMaFo).