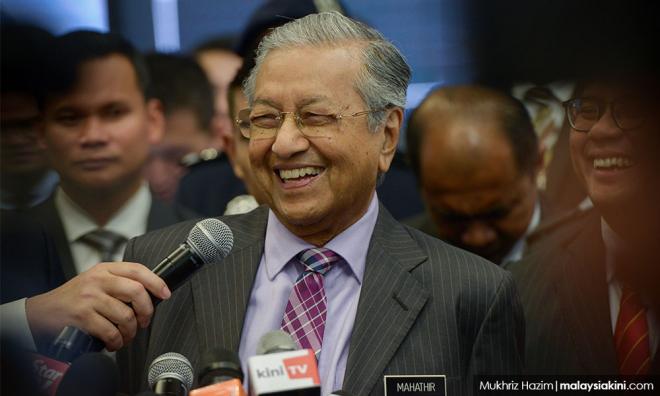 LETTER | Malaysia has the rare distinction of being one of the few nations that has elected a dictator not once, but twice.

In just over a month, Dr Mahathir Mohamad, once the hero of Harapan’s stunning election victory in 2018, has managed to destroy the ruling Harapan government’s hold on the nation with two toxic issues.

Two weeks ago, the Ministry of Education, in an unanticipated and almost unorthodox move, decided to introduce the art of Malay calligraphy or khat, into the primary school syllabus without consulting stakeholders. An unusual move in the Harapan set up and promise of consultation.

The chorus of disapproval from the Chinese community, as well as other non-Malay groups, was palpable, pushing the DAP into a corner.

The party, with the second most number of parliamentary seats after PKR, is now tearing at the seams to contain the collateral damage from the recent khat and Lynas issues.

Lynas, an Australian company that was licensed to carry out rare earth mining under the previous Barisan Nasional government, has received a reprieve of sorts from Dr Mahathir.

He has hinted that the company may now be allowed to continue operations, despite a promise by Harapan, in its election manifesto, to halt mining and storing of hazardous material in Malaysia.

Two elected representatives from the DAP, Ronnie Liu and Charles Santiago, last week took the world’s oldest Prime Minister to task and questioned the autocratic manner in which he decided on the introduction of the calligraphy into the school syllabus, and the on the extension of the Lynas rare earth’s license to do business in Malaysia.

In a quick response to the criticism by the two DAP leaders, the Harapan supremo, in his trademark sarcasm, asked his critics if he ought to consult them before he makes any more decisions. Or if they had the temerity to think they were his equal in the political pecking order.

DAP's Klang MP Charles Santiago had expressed concern that the prime minister had been making unilateral decisions on issues that affected Harapan's governance.

Santiago had told a gathering of reporters: “It looks like there is too much power in the hands of the prime minister and this power needs to be shared equally amongst all the component parties."

In a quick rebuttal, Dr Mahathir responded: "In future, when I make a decision, I can ask Santiago whether he agrees or not. If he does not agree, then I will not do it. I will get his opinion because he is equal to me."

The harsh and repressive response is reminiscent of his old, dictatorial self when he reigned for 22 years with an iron fist.

In the matter of Lynas, both the DAP and PKR, the two largest components in the Harapan government, have pushed, as part of their manifesto before the general election, for the closure of the rare earth processing plant in Gebeng, Kuantan.

Now, Dr Mahathir is backtracking on the election promise. His excuse: the move will frighten away potential foreign investors.

These matters have put pressure on the Harapan component parties when the main issue facing the people are bread and butter ones.

Sky high cost of living, dwindling wages, rising household debts, and a very slow pace of development are pressing issues that need to be dealt with by all sectors of Malaysia’s diverse society.

But Dr Mahathir seems to be hell bent on dividing and ruling with nary a care for his larger coalition partners.

Meanwhile, he attended Singapore’s National Day Parade on August 9. Dr Mahathir, who at best has had feisty foreign relations with Singapore’s leaders in the past, knew that he would be received with adulation from the invited guests, comprising leaders of Asean and the region. He is still being touted as the greatest comeback kid in Asian politics.

Unfortunately, at home, he is increasingly seen as the man who may eventually cause the disintegration of the Harapan coalition.

What happened between May 2018, when he led a rag tag team of opposition parties to a historic and stunning victory, and the present?

Dr Mahathir is aware that the party he leads, Bersatu, is a dwarf in terms of parliamentary representatives. Once he leaves, the party is almost certain to be left out of the political equation.

So it is imperative, in his thinking, to wreck and ruin the two largest parties in the ruling coalition, PKR and the DAP.

Having sowed the seeds of discontent in PKR, which is now in tatters, he trained his attention on the DAP, which is covertly backing Anwar Ibrahim for the next Prime Minister’s post.

By introducing Malay calligraphy into the school curriculum out of the blue, he knew that a large number of Chinese educationists and NGO’s would turn against the DAP for failing to ‘protect’ Chinese rights and education.

It seems to be working very well. Perhaps better than even Dr Mahathir expected.

Today, the DAP is facing its biggest ever crisis of confidence. Liew Chin Tong, a senator and Johor DAP chief, who is also Deputy Defence Minister, admitted that the DAP is facing its “worst crisis since Pakatan Harapan came into power in May 2018, and no doubt one of its most serious crises in DAP’s 53-year history,” after the khat issue surfaced.

He said that strong emotions were being whipped up against the party “based on very few facts, mostly twisted ones.”

Liew’s description of the party’s woes are no exaggeration. Across social media platforms, there is a growing intensity for the resignation of DAP’s Deputy Education Minister, Teo Nie Ching.

Teo is alleged to have said that the khat issue was part of a plan that was a follow through of the previous government. This did not go down well with the grassroots.

Harapan came into power on the promise of an overhaul of BN’s policies of divide and rule.

For many, Teo merely did a “cut and paste” job without consulting stakeholders on the wider implications of the policy.

Dr Mahathir has now successfully thrown the DAP into disarray. For many non-Malays, he has become the number one enemy, insisting on a Malay supremacy agenda.

At the same time, Finance Minister Lim Guan Eng, who is DAP’s Secretary General, and his father, veteran politician Lim Kit Siang, are now seen as racist chauvinists by the Malays.

Dr Mahathir now is seen as the hero of Malay rights and Islam. With this, he now has almost full control over the Malay based parties in the opposition and the ruling Harapan coalition.

The biggest losers are the DAP. They are seen as betrayers of the Chinese community and their other non-Chinese supporters. Moreover, to the Malays, the party is the real enemy of the state.

Dr Mahathir, in effect, has neutralized the two biggest parties in the Harapan coalition. PKR is imploding from within and the DAP is being crushed by public opinion that it is being overly obsequious to Dr Mahathir.

Now that the seeds of destruction have been well planted and germinating, Dr Mahathir is set to put into motion his plan of expanding Bersatu’s sphere of influence.

He sees Anwar Ibrahim as an interim Prime Minister, filling the gap until his party and his son Mukriz, the current Chef Minister of Kedah, have been properly schooled in the art of political deception, divide and rule.

It is textbook Dr Mahathir, adding a dose of irony in the political quagmire by introducing khat lessons into school textbooks.

While the rest of the country can go up in toxic fumes, Dr Mahathir waits patiently as both PKR and DAP crumble before he makes his next move.

In the story of the Pied Piper of Hamlin, the people promise to pay the piper after he has ridden the town’s infestation of rats. After leading the rats out of the town by playing a tune on his pipe, the people refused to pay up. They paid the price when all the town’s children disappeared.

Not a happy conclusion in that tale.

It seems the same fate awaits Malaysia, as Dr Mahathir calls the tune and the nation dances in a runaway frenzy of racism, bigotry and divisive politics.

He, who pays the piper, calls the tune. Woe betides those who fail to pay him.

The views expressed here are those of the author/contributor and do not necessarily represent the views of Malaysiakini.
politics
mahathir mohamad
ronnie liu
charles santiago
pkr
dap
bersatu
pakatan hrapan
Related Reports
Mahathir out of line with 'Dong Zong racist' claim - Gerakan
a year ago
‘Watch your words, do your job' - Santiago tells Maszlee in latest salvo
a year ago
Yoursay: DAP digs own grave by appeasing Mahathir
a year ago
Sunday’s anti-Lynas rally to end with burning Harapan manifesto
a year ago