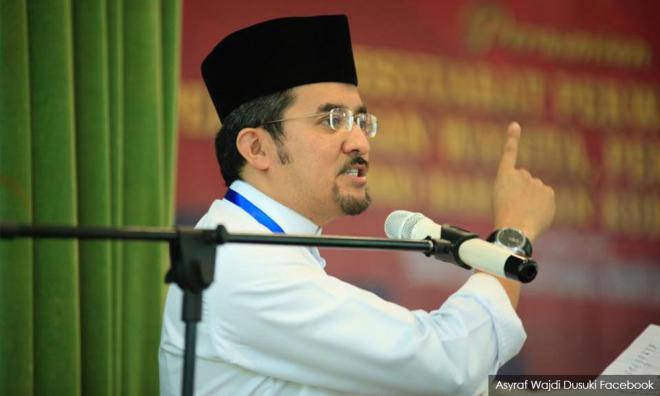 COMMENT | Asyraf Wajdi (above), youth leader of Umno has issued a statement saying that we, the DAP leaders, are racists and extremists by quoting several statements alleged made by PH leaders.

I wonder how long more these Umno people will use DAP as their punching bag for their political survival. Clearly, in the last General Election 14, Umno and the same like-minded political parties was rejected by a majority of Malaysians, and Umno still can't accept the fact that they are not relevant anymore to the majority of us.

Having said that, Umno, through its youth leader, continues to spread lies and hatred among the public against the government elected by the people with overwhelming support.

In the statement issued by Asyraf Wajdi, he accused me of playing up a racial issue in the Seafield temple matter which caused the death of a firefighter. The statement issued by me was stating the facts of the incident, which started with 50 thugs from one particular race/religion entering into the Hindu temple with dangerous weapons in the early morning, which was confirmed by our Home Minister Muhyiddin Yassin.

"The Home Minister said police investigations revealed that the leader of the group which instigated the conflict was handed RM150,000 by the lawyers, which was used to pay the thugs involved from RM150 to RM300 each.

"Because they hired Malays to 'take care of things' at Hindu temple, you can imagine the reaction it would trigger.

"As an example, imagine what would happen if you send Hindus to take care of mosque?" said Muhyiddin at press conference here on Wednesday (Nov 28)."

The criminal intimidation by the thugs entering into a religious place with dangerous weapons and chanting their religious words, if not to create racial tension, then what else could be their intention?

However, Asyraf Wajdi failed to mention the illegal entry of these thugs which actually caused the incident to take place. On the night of the next day, a large number of people from one particular race gathered on the opposite side of the road, marched towards the temple and issued a warning to the devotees, as well as the temple management.

This caused a large number of Indians from all over to gather around the temple to protect and defend the temple out of fear of the intimidation by the opposite race. When a large group of angry Indians gathered at the temple due to the action by people from another race, the situation was out of control.

I was merely stating the facts of the incident, and not in any way caling the Indians to gather for rioting. All the PH leaders, including our Prime Minister Dr Mahathir, condemned the action of the 50 thugs.

I'm wondering since when condemning an unlawful action is classified as racism, or allowed me to be labelled as an extremist? Probably Umno is using its own dictionary to define 'racism' and 'extremism' based on their own interpretation. Again I urge Umno and the youth leader to read my statement, if they didn't previously.

However, I'm still looking for any condemnation issued by Asyraf Wajdi or Umno against the illegal entry of the 50 thugs into the Hindu temple. So far, I have failed to find a statement by him condemning the illegal entry of these thugs, despite claiming that they were a government for all Malaysians during the 60 years of their administration.

When they became the opposition, everything changed. No more defending all Malaysians' interest, but only one particular race. Yet they are calling me and other PH leaders racists. Hypocrites!

Let us go through the actions of this youth leader, as well as Umno and its allies, on several issues. Firstly, when the PH government wanted to ratify ICERD, it was this youth leader from Umno who protested the signing and ratification of ICERD.

If we understand clearly what is ICERD (International Convention on the Elimination of all forms of Racial Discrimination), no right-thinking people will object or protest against this Convention. ICERD promotes the ending of all forms of racial discrimination. To a certain extent, privileges and the special rights of Bumiputera will not be jeopardised, as positive discrimination is allowed to uplift any particular race. This is enshrined in the convention.

Despite various assurances given by the government, and even after government dropped the idea of signing and ratifying the ICERD, Umno and it's allies still carried out the demonstration. What actually did Umno support by holding the demonstration? They showed to the world that Umno and its allies will not allow or support any efforts to end racial discrimination.

Same goes for the signing of Rome Statute. Due to the unnecessary demonstration and protests, the government had to withdraw from the Rome Statute within a month after signing it.

Actually, Rome Statute will give an access to our government to refer any international crimes to the international court. However, due to provocations, people were against the government by saying that the Rome Statute will affect our Yang de Pertuan Agung and the Sultans. Experts explained that it would not affect our royalty, but it fell on deaf ears. Umno did not condemn the demonstration, but co-organised it.

When government revealed the mismanagement and misappropriation of Tabung Haji funds by the previous management headed by Umno people, no condemnation was issued by this youth leader or Umno or its allies.

Recently, when an NGO called Muslims to buy only Muslim products, the same youth leader and Umno did not condemn the action.

We Malaysians are still together and living harmoniously, despite all these racial issues played up by UMNO. In restaurants, all the races are taking their meals as brothers and sisters. During Hari Raya, Indians, Chinese, Sikhs, Kadazans, Muruts, Dayaks and other races visit our Malay brothers' houses, and the same happens during Chinese New Year, Deepavali, Christmas and other festive days.

Only Umno and its allies are playing the racial issues in social media and portraying as though we are in the midst of a racial crisis. I believe every right thinking Malaysians will not fall into the racial trap set by Umno.

To Asyraf Wajdi, enough lah brother! How long do you want to use this narration to instil fear among Malaysians? Stop using race and religion for your survival. People have rejected you. Please accept the fact and move on.

V GANABATIRAU is the vice-chairman of Selangor DAP.