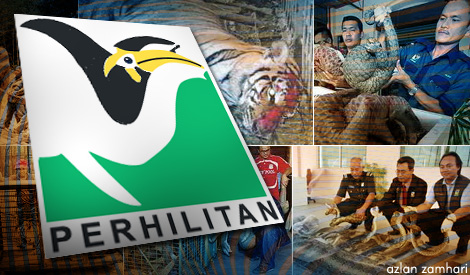 Police involvement in protecting wildlife is much needed

LETTER | Sahabat Alam Malaysia (SAM) commends Inspector-General of Police (IGP) Abdul Hamid Bador for his duty of care and national responsibility towards the protection of our nation’s wildlife.

Hamid has made positive statements to combat the smuggling and trafficking scourge with the mobilisation of air, marine and land units to assist the Wildlife Department in thwarting wildlife crime on land, air and sea.

The assurance from the IGP of tougher laws and more drastic measures and actions to ensure more poachers are brought to justice under Malaysian law is most welcome.

The international illegal trade in wildlife and wildlife products has reached crisis proportions. It is a threat to the existence of iconic species and is a significant cause of the depletion of wildlife.

The growing menace of wildlife trafficking necessitates a call to action which is increasingly recognised by governments, conservation organisations and law enforcement agencies.

There is an urgent need, therefore, to capitalise on this consensus and move forward from just recognising the problem of identifying the strategies and approaches that can successfully prevent this trade.

Without serious action, the already critically small population of the Bornean pygmy elephant will suffer the same fate as the Sumatran rhino. The Banteng is also in grave danger, numbering less than 500.

And before long, sun bears, pangolins and clouded leopards will fade into oblivion. Currently, poachers are targeting the critically endangered helmeted hornbill for its famed red crown, prized by collectors.

Regardless of the increased focus on combating wildlife crime - harsher punishments and improved wildlife enforcement capabilities - poaching numbers continue to increase. Why is this so?

This is because of the absence of arrests of high-level individuals in connection with these seizures. Arrests that have been made seem to focus on low-level couriers and runners - this does little to dissuade the trade.

Though some offenders - usually couriers - have been arrested and convicted, they only played minor roles in the echelons of the criminal networks. Seizures in the absence of arrests do little to address transnational wildlife crime or stop the killing of the world’s endangered species.

Little is being done to investigate money laundering, which is also related to these crimes. It is very important that the Royal Malaysian Police (PDRM) and the Malaysian Anti-Corruption Commission (MACC) address the transnational organised crime aspect of money laundering.

Corruption is a major facilitator of all types of transnational organised crime. The very high profits, as well as the low risk and high reward opportunities for traffickers enable them to bribe low-paid public officials.

Criminal actors from other criminal sectors are attracted to environmental crime because of a combination of high profits and low probability of getting caught and convicted. This applies especially with respect to transnational activities, where enforcement has been virtually non-existent in the past.

It is a race against time and the government has to take the lead in bringing poaching under control. It may be too late for the Sumatran rhino, but decisive action cannot come soon enough for the dwindling population of other endangered species.

Poaching can be prevented if people are willing to take action too. It is high time for change to address the problem. The increased involvement of the PDRM would go a long way to address the issue of poaching and the lack of arrests arising from major seizures made by the Customs.

Tackling the challenges of wildlife requires different combinations of expertise and collaboration among various enforcement agencies, with varying approaches to protect the natural habitat and wildlife. To be successful, these will need to be combined with a concerted effort to raise awareness and challenge traditional mindsets.

MEENAKSHI RAMAN is president of Sahabat Alam Malaysia (Friends of the Earth, Malaysia).