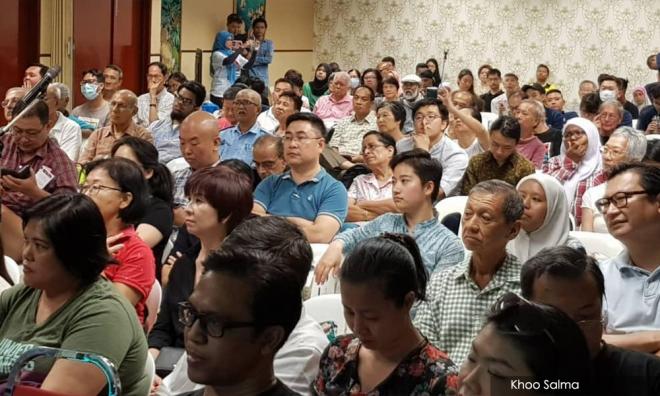 LETTER | Agora Society has been following closely the development of Forum Peduli Rakyat which was spearheaded by Penang Forum to address various socio-economic development and environment issues in Penang.

The forum was reportedly well attended, with 200 participants according to the media, and this further gives credence that Penangites feel there is a need to listen to different opinions on the state government’s development plan, as well as existing and future policies.

It was a public event announced weeks before the day, and the organiser had convened a press conference calling for attendance. Yet, Penang Forum’s personal invitation to the state government and backbenchers to establish meaningful dialogue through the forum mostly fell on deaf ears, with the exception of only two to three state assemblymen who courteously declined the invitation through email.

To add insult to injury, 10 state backbenchers of DAP have since taken the liberty to accuse Penang Forum of siding with the opposition and opposing the state government without constructive feedback.

Agora Society is dismayed by the harsh statement against Penang Forum and wishes to respond to the 10 backbenchers as follows:

1) While it is true that Penang Forum is an unelected entity but it is wrong to call it undemocratic. A functioning democracy should enable civil society organisations (CSOs) to perform their functions which include advocating alternative policies and holding the government to account.

While the government may choose to disagree, they should at least appreciate the role Penang Forum is playing to promote sustainable development. What is perhaps undemocratic is when a leader of a certain political coalition has written a manifesto before the election, only to proclaim it is merely a guide to its policies after winning power.

2) The backbenchers have further alleged that Penang Forum’s non-political stance has since been compromised by working together with opposition parties. Agora Society wants to remind the 10 backbenchers that a functioning CSO is free to work with any political parties as long as their views and opinions towards a certain issue are aligned.

What the state government should do is to cooperate with Penang Forum to address the latter’s concerns. Also, the backbenchers seemed to suggest that only a CSO that is supportive of the government should be recognised as such, and this is eerily similar to the time when BN stood ready to accuse Bersih 2.0 as an opposition party, rather than an organisation that truly advocated for free and fair elections.

3) It is well known that this is not the first attempt from Penang Forum to establish dialogue with the Penang state government through public forums. In fact, both DAP frontbenchers and backbenchers were absent from similar public forums held in recent years especially after GE14.

If anything, skipping a forum just because it risks being perceived as an opposition political rally should be the last thing on the mind of a state assemblyperson.

The backbenchers, elected to represent their constituents’ concerns, would do well to remember the forum was well attended. By declining to attend the forum, they have effectively forgone the chance to clarify their own stand and the state government’s policies, let alone listening to their constituents.

Ironically, they were certainly supportive of and might have even attended the various rallies organised by Bersih 2.0 or Kita Lawan when either was accused by BN of being an opposition stooge masquerading as social movement.

4) Agora Society is dumbfounded that instead of considering the alternative proposals - written by various experts on a voluntary basis - Penang Forum has put forward on transport, housing, and environmental issues such as land reclamation, the backbenchers seemed to insinuate that they should be grateful they are now able to hold a forum in a government building.

Lest the backbenchers forget, Dewan Sri Penang is a public building of the people, by the people and for the people. Undoing what has been previously a morally and principally wrong policy does not absolve the state government of any policy mishaps or failures.

5) Again, Agora Society is left confused with the fifth line: since when are the backbenchers authorised to dictate what a CSO has to contribute?

What Penang Forum is mainly concerned about is the potential environmental degradation and social impacts that will beset Penang due to the state government’s unfettered development policies. Whereas, it is the task of the state government and its backbenchers to explain and, should it agree, defend its development plans against Penang Forum’s proposals through debate and discussion in public forums – from which they are mostly absent.

CSOs are essential to the workings of a healthy democracy and their independence of direct government control and management helps prevent any co-optation from the executive. Therefore, CSOs such as Penang Forum that have come under a baseless and vitriolic attack from the state must be defended.

In view of this, Agora Society would like to take this opportunity to express unreservedly its solidarity with Penang Forum, so as to ensure a more sustainable and environmental-friendly Penang.

The Agora Society Malaysia is a loose network of individuals who believe in the principles of democracy and good governance.

State DAP backbenchers respond to Penang Forum
16 Feb 2020
Looks like we have to kick out the YBs before they'll listen, says activist
15 Feb 2020
Gov't leaders not yes men, forum on local polls told
13 Jan 2020
A small spark of hope for bipartisan cooperation in SDGs
3 Jan 2020