The police visited Malaysiakini office this afternoon for the second consecutive day to continue their investigation into a reader's letter regarding the 'no compulsion in Islam' remark by PKR vice-president Nurul Izzah Anwar. 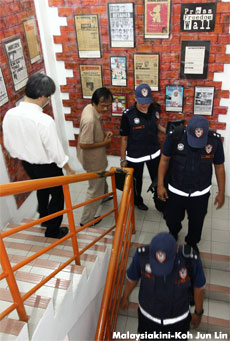 With the consent of the letter writer, Steve Oh, Malaysiakini handed over his email address to the police.

"I do not want you ( Malaysiakini ) to lose your computers so please feel free to give the police my email details under protest and offer them every cooperation...," Oh said in an open letter today.

The police left soon after. Unlike yesterday, when statements were taken from three Malaysiakini staff, no statement was recorded today. 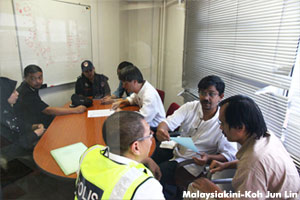 They arrived at the news portal's headquarters in Bangsar Utama, Kuala Lumpur, at 4pm and left at around 4.30pm.

On arrival, the police produced a new search warrant issued by a magistrate in Petaling Jaya, under Section 298 of Penal Code. They did not confiscate any item from Malaysiakini .

Their search warrant yesterday was issued under the Sedition Act, which could have been an error on the part of the police.

dzri reiterated that the investigation was being carried out under Section 298 of the Penal Code, not the Sedition Act.

The section deals with the offence of "uttering words ... with deliberate intent to wound the religious feelings of any person".

If found guilty, the offender can be punished with imprisonment for up to one year, with a fine or both.

The letter being investigated was authored by Oh and published by Malaysiakini on Monday, titled 'Nurul's watershed idea for the nation' . 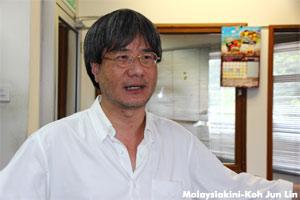 Gan ( left ) described today's meeting with the police as cordial.

"None of our computers was confiscated. As such, our work has not been unduly disrupted," he said.

Malaysiakini was raided by the police in 2003 and 19 computers were seized. That incident was also over a letter to the editor written by a reader.

However, no charge was filed and the case was eventually closed two years later.

I stand by my views, says letter writer

Lawyer: Nurul only re-affirming the constitution

Izzah and apostasy - the real heart of the matter

It takes 15 cops to probe a letter

When politics is mixed with religion