Sekinchan assemblyperson Ng Suee Lim today accused Barisan Nasional of land grab in Selangor, revealing that it had acquired a total of 24 state lands at RM1 per square foot, even though the total market value is estimated to be at least RM20 million.

The total size of the lands spanning seven out of nine districts in Selangor is approximately 33.5 acres or 1,459,260 square feet.

"All of them are high value lands, they are commercial lands... after Umno, MCA, MIC and Gerakan get the land, they immediately get into joint-ventures (to develop the land) or sell them off for tens of thousands or millions of profit," he alleged at a press conference at the Selangor Legislative Assembly lobby this afternoon.

Of the 24 lands, he said Umno obtained the lion's share at 15, while MCA, MIC and Gerakan acquired five, three and one respectively for the generous price.

Valuation of lands to be commissioned

The largest involves a 7-acre land in Klang with lot number PT125400, 4 acres of which is owned by Kota Raja Umno division, while the rest belongs to the Shah Alam City Council (MBSA).

Another land which Lim highlighted was in Ulu Langat with the lot number PT4545 and a size of 2,310 square metres, which is now in the possession of Umno. 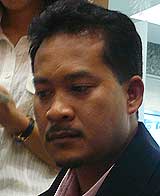 Lim also highlighted a land with PT number  PT190 in Kuala Selangor, now in possession of MIC, which he claimed had among others, former MIC president Samy Vellu as a trustee.

He said that a report will be lodged with the police and the Malaysian Anti-Corruption Commission (MACC) soon and the state government will also commission a valuation of the said lands.

"These are based on facts... I challenge BN to return the lands to the people of Selangor," he said.

'Cheap land for Umno used for the community'

Selangor MCA: Nothing wrong in getting cheap land

Can Bersih, too, apply for cheap land?

Listen to MCA - nothing wrong with stealing