Largely silent on incessant attacks against him, Prime Minister Najib Abdul Razak says he is fighting back.

"I'm in fighting shape," Najib told The Star in an interview published today.

Clawing back, the Umno president said he never had close ties with Umno number two Muhyiddin Yassin, whom he sacked from the cabinet.

"We were okay, but the relationship was too formal… No need to call, I mean he could have come to see me as and when.

"Just walk into the office, surely I would see him. Or drop by the house to say I need to discuss something with you," said Najib, adding that it should have been the practice to develop a relationship. 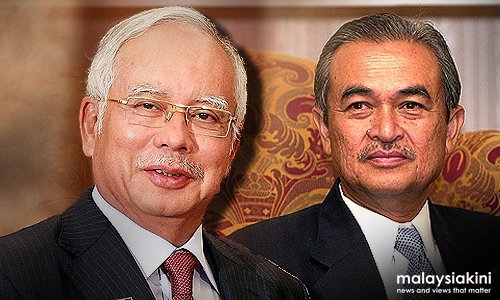 Najib, who said he still enjoys a good relationship with former prime minister Abdullah Ahmad Badawi ( on right in photo ), also took a swipe at Muhyiddin's failure to understand the "special relationship" between an Umno president and his deputy.

"I never asked him (Abdullah) about political funding when I was his deputy, that was the job of the party president since Tunku Abdul Rahman’s time," he said in reference to Muhyiddin's criticisms on the RM2.6 billion donation scandal.

At the same time, Najib also said that Umno vice-president Ahmad Zahid Hamidi is doing well as deputy prime minister, doing a lot of things without being asked.

"One evening during the Asean Summit, I was watching the rehearsal; he just turned up and said, 'I’m here to just give you moral support'.

"That kind of relationship is important between two top leaders," said Najib, adding that there must be trust and a level of comfort with one another.

'Who has he not quarrelled with?'

Najib also insisted that what Mahathir really wants is a prime minister who listens to his demands.

In a blog post last night, Mahathir had said he only withdrew support for Najib after the 1MDB issue had boiled over.

Mahathir also accused Najib of having tried to bribe him through asking what he wanted, including several development projects.

Asked whether there is any chance of mending ties with Mahathir, Najib merely said, "It takes two to tango..."

"But to tango might not be the right word. It might be a wrestling match," he quipped.

Both Mahathir and Muhyiddin are expected to attend the Umno AGM at the Putra World Trade Centre today.

'I'm in fighting shape,' says Najib of attacks on him

Najib: I'm a gentleman, come and meet me

PM: No salary hike for civil servants if GST not implemented

Dr M in the house, pro-Najib portal zooms in on pink attire

Najib: A two-party system? No way