Muhyiddin said this was specifically on the RM42 million in Najib's personal bank accounts which was the subject of the Malaysian Anti-Corruption Commission (MACC) investigation.

"I was told the attorney-general met the prime minister and told him that the MACC investigation found the money in his account.

"When this was told to the prime minister, he said, 'No, there isn't'. But it (the money) had already been confirmed by the attorney-general.

"The money was proven to be there because he (Najib) spent it," Muhyiddin told a PAS ceramah in Kemaman, broadcast live on Facebook, last night.

He did not specify when the meeting between Najib and Abdul Gani took place, but it is likely before July 28 last year, when the latter was removed as AG.

Muhyiddin said Abdul Gani had briefed him at the time that the RM42 million originated from two companies.

There were multiple deposits into Najib's personal bank accounts, but the MACC had only zoomed in on funds originating from SRC International Ltd, a former subsidiary of 1MDB.

It was previously reported that RM42 million from SRC International was deposited into Najib's personal bank accounts in two transactions on Dec 26, 2014 and Feb 10, 2015 respectively, after being routed through Gandingan Mentari Sdn Bhd and Ihsan Perdana Sdn Bhd.

Muhyiddin last night also reiterated he was briefed by Abdul Gani about the US$681 million (the notorious RM2.6 billion) in Najib's personal bank accounts and had seen the financial statements.

The MACC accepted the explanation that the larger amount was a "donation" and did not pursue the matter .

This money was the subject of the US Department of Justice's (DOJ) investigation into money laundering in their country, which concluded the funds had originated from 1MDB and eventually ended up in the bank account of an unnamed "Malaysian Official 1".

In January, Gani's replacement attorney-general Mohamed Apandi Ali cleared Najib of wrongdoing over the RM2.6 billion on grounds that the money was purportedly a "donation" from a member of the Saudi Arabia royal family.

He also cleared Najib for receiving funds from state-owned SRC International on grounds that the prime minister did not know about the transactions, and thought that it was part of the RM2.6 billion "donation".

Documents held by Apandi during the press conference, photographed and enhanced by journalists, also revealed that two additional transactions of RM6 million and RM27 million flowed into Najib's accounts on June 10 and July 6, 2014 after being routed through Putra Perdana Construction Sdn Bhd and Permai Binaraya Sdn Bhd respectively.

The bulk of SRC International's funds remain unaccounted for to date, although it is not part of the US DOJ 136-page filing.

When the news of these deposits first broke through a The Wall Street Journal expose, Najib had denied wrongdoing saying he had never taken public funds for personal gain. 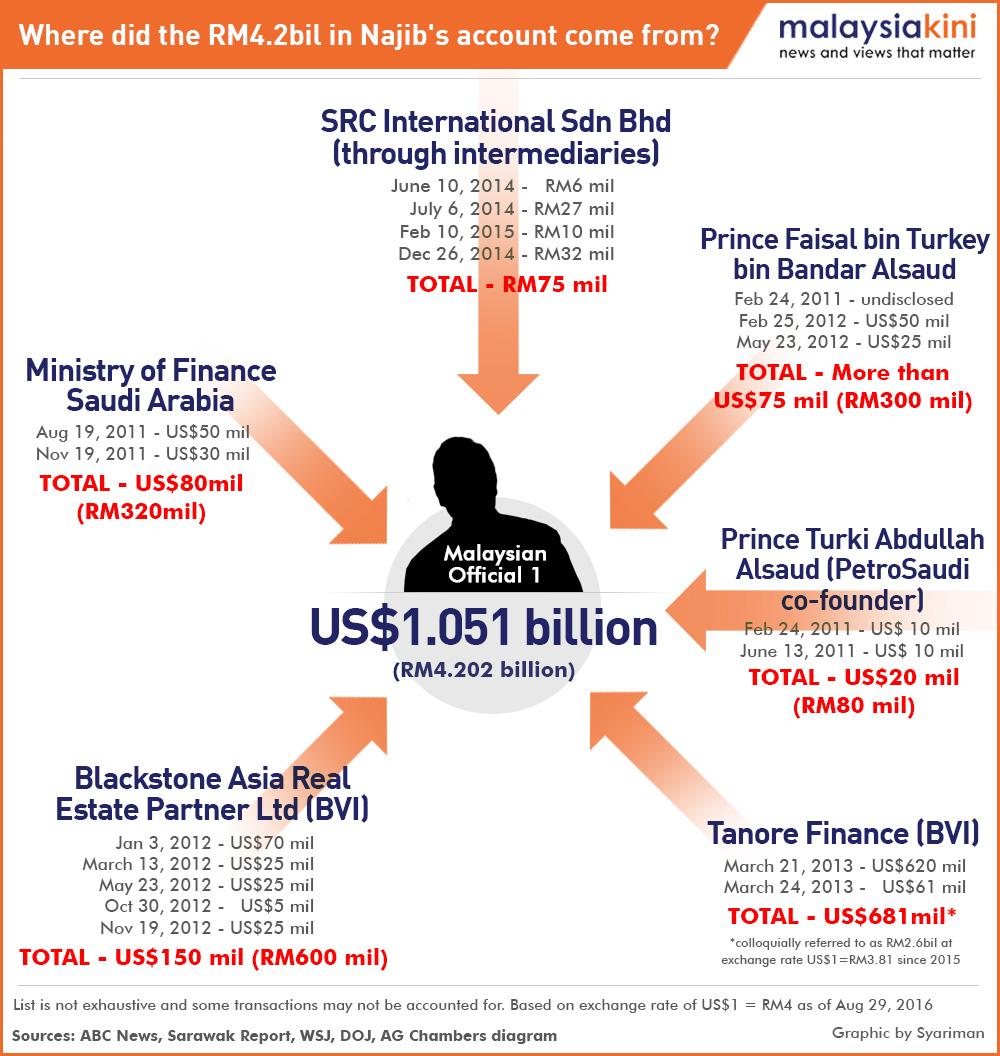