This is the fifth article in a series to explain why the Penang state government should get an independent review of the Penang Transport Master Plan (PTMP).

ANALYSIS | Much has been said about the Penang state government prioritising the construction of a Light Rail Transit (LRT) system from George Town to the Penang International Airport.

This together with several other mega-infrastructure projects under an altered version of the Penang Transport Master Plan (PTMP) which ballooned from RM27 billion under Halcrow to RM46 billion under the SRS Consortium.

What has not been aptly explained is why the state has chosen the LRT which is not only much more expensive to build but also costlier to operate and maintain, compared to alternatives such as a tram or BRT (bus rapid transit) system.

Curiously enough, the state is insistent on pursuing the LRT project even though the tram and BRT were recommended in the original PTMP designed after a meticulous study by UK-based engineering consultant Halcrow.

Despite the Halcrow PTMP having been officially adopted by the state in March 2013, the PTMP was radically redone by a Gamuda-led corporate entity named SRS Consortium which was awarded the contract to implement the plan.

But is the projected LRT ridership by SRS realistic? Has the state done a financial analysis on the expected annual deficit of operating the LRT, as opposed to a BRT or tram system? Is it putting Penang at financial risk?

Why was no comparative study done on the financial viability of alternative public transport systems before a choice was made?

Table 1 below shows that it is three times more expensive to construct an LRT (RM220m/km) compared to a tram (RM80m/km) and 4.5 times costlier compared to an elevated BRT system (RM50m/km). 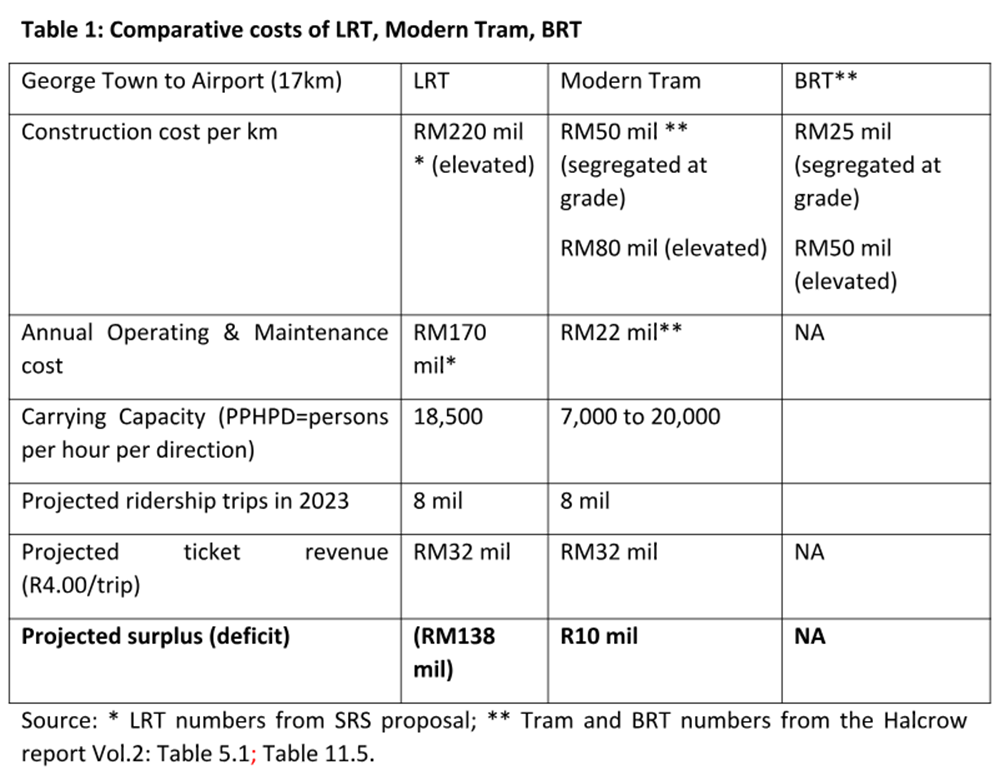 SRS estimated the annual O&M (operation and maintenance) cost for the LRT line at RM170 million, while the Halcrow report estimated the O&M costs for the tram line to be RM22 million.

Is SRS’ projected ridership for the LRT at 42 million per year (116,000) per day realistic? Or is it inflated? A recent article similarly questioned the 42 million ridership figure.

The writer said: “How is it possible for the Penang LRT to have an annual passenger journey per person much higher than most MRT lines in London, Singapore and Kuala Lumpur when it does not have an interchange station with other rail links during its first year of operations?”

As a comparison, the daily total ridership for Rapid Penang buses in the whole state is still less than 100,000 per day after more than 10 years of operation.

Using the experience of Kuala Lumpur’s three LRT lines as a guide, the actual ridership for the three range from 3% to 20% of projected ridership, with an average of 18%.

Hence, we believe that a projection of 8 million trips (19% of original projection, i.e. 21,920 trips per day) is more realistic than the 42 million per year claimed by SRS. 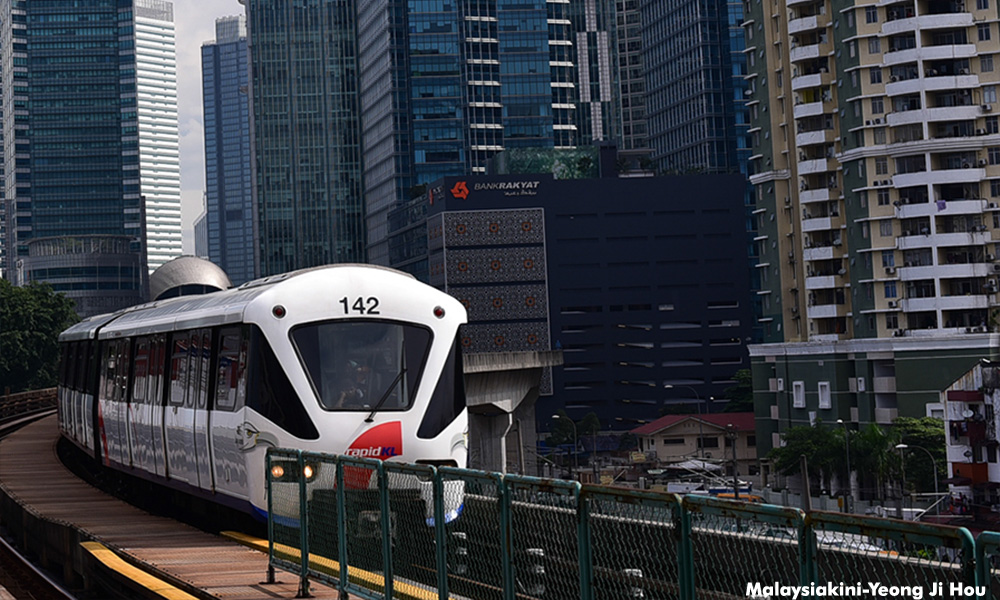 Based on the eight million trips costing an average of RM4 per trip, the projected deficit for operating the LRT is RM138 million per year. In contrast, the projected surplus for the tram is RM10 million a year. See Table 1 above.

While this is a back-of-an-envelope estimate, the state government must commission an independent comparative financial analysis of the various modes of public transport systems, which it has not done, before making such major decisions.

The KL-Klang valley LRT experience is further instructive. Within the first two years of its operation, the projects racked up massive losses due to inflated financial projections.

The federal government had to pump in RM5 billion or more to bail out the operators. It would be irresponsible for the Penang state government to plunge the state into financial distress.

In conclusion, we call on the state to exercise fiscal prudence and conduct proper studies and comparisons with other cheaper and more sustainable public transport systems before leading Penang down a treacherous path.

1. To make valid comparison across the different systems, only the construction costs, inclusive of the electrical and operating systems, are used. These numbers do not include land acquisition costs that vary significantly.
2. Halcrow recommended 3 tram lines for the island, each with almost equal distance, with annual O&M costs of RM67 million. We, therefore, used RM22 million as the cost for one line (see Table 11.5, Halcrow Report Vol.2).

Part 5: Why Penang’s expensive LRT plan must be reviewed

Part 6: Why an independent review of the SRS-proposed PTMP is needed