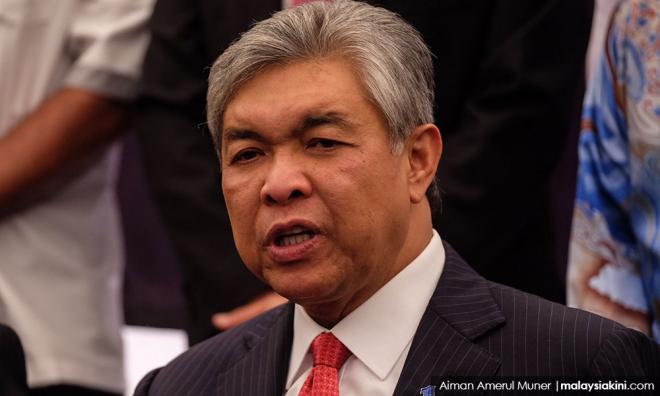 Speculation of Umno president Ahmad Zahid Hamidi's arrest by the MACC today has sparked a flurry of supportive statements from fellow party leaders.

Many urged Umno members to pray for Zahid to give him strenght needed to endure the investigations.

Umno vice-president Ismail Sabri Yaakob said all members of Selangor Umno, which he leads, are standing firmly with Zahid.

"We pray to Allah to grant Zahid patience and strength in this difficult time. I urge all Malaysians, supporters and members of Umno, to stand firm and pray.

"We hope Zahid will be granted justice by the courts, without political pressure and interference," he said.

Wanita Umno chief Noraini Ahmad said the movement was praying for Zahid in hope that God would help him through this trying times.

"Wanita Umno sympathises with Zahid and will continue to hold prayer sessions to ask for Allah's help," she said, adding that Zahid must be given a chance to defend himself in accordance with the rule of law.

Umno deputy president Mohamad Hasan said it remains to be seen whether Zahid will really be arrested and charged by the authorities. Therefore, he urged Umno members not to jump to conclusions when issuing statements.

"We must respect the criminal justice system and show confidence that Malaysia upholds the rule of law," he said.

He said the that Umno supreme council will meet soon to discuss this development and decide on the party's direction.

"Not only is (Harapan) being cruel to the people, they are abusing anti-money laundering laws to put pressure on their political enemies, including the president of Umno and the opposition leader.

"Is this 'rule of law' or is this selective prosecution and vindictive politics?" she asked.

Zahid was called to the MACC today for questioning - the sixth time since July 3.