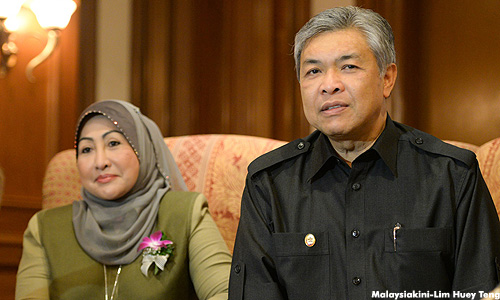 Umno president Ahmad Zahid Hamidi had rejected his lawyer's proposal to seek his release from the MACC headquarters in Putrajaya, according to his wife Hamidah Khamis.

“The lawyer wanted to free him but he refused. He (Zahid) will be here (MACC headquarters) until tomorrow morning (and be taken) straight to court,” she was quoted as saying by Bernama.

The national news agency reported that Zahid had refused his lawyer's proposal to seek bail for him.

Quizzed on how she felt regarding her husband's arrest, Hamidah replied, “I am okay.”

“Back when he was Umno Youth (leader), he was arrested for 10 days (under the Internal Security Act 1960). Don't worry, pray for him,” she told reporters.

Zahid was arrested under the now-defunct ISA in September 1998, weeks after Mahathir had sacked Anwar Ibrahim as deputy prime minister.

At the time, the Umno leader was a staunch supporter of Anwar.

Recalling this episode in an interview with Sinar Harian in March 2016, his daughter Nurulhidayah said her father was freed when her mother penned a letter to Mahathir.

She claimed that her father was released in Kuala Lumpur and was left blindfolded on a highway.

“Abah (father) was arrested under the ISA for 10 days. He was arrested in Sabah. Imagine, I was only 18 then.

"My mother said if Abah is arrested for two weeks it would mean that he would be held in prison for two years, but Alhamdullilah (thank God), he was released.

"That too (after) mother wrote a letter to the then prime minister. Abah was freed in Kuala Lumpur; he was left on the highway with his eyes covered (blindfolded)," she had said.

This afternoon, the MACC arrested Zahid over allegations of graft, criminal breach of trust and money laundering.

The former deputy premier is expected to be charged tomorrow.