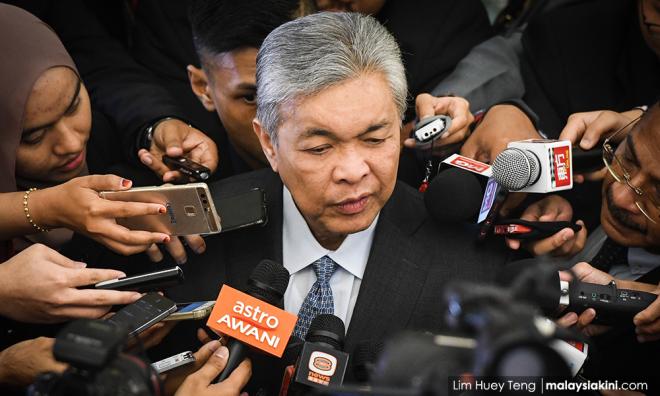 MACC has arrested Umno president Ahmad Zahid Hamidi and he is expected to be slapped with charges related to graft and money laundering tomorrow.

In a statement today, MACC said this was in connection with investigations involving an unnamed foundation.

The commission also said the former deputy prime minister is being investigated for abuse of power, criminal breach of trust and money laundering.

The Attorney-General's Chambers had consented to the charges.

The commission added that Zahid will face charges under the MACC Act 2009 and the Anti-Money Laundering, Anti-Terrorism Financing and Proceeds of Unlawful Activities Act 2001.

Zahid was arrested at 3.15pm, following his sixth session with the MACC at its headquarters in Putrajaya since July.

He will be brought to the Session Court in Kuala Lumpur at 8am tomorrow.

In July, the Bagan Datuk MP was questioned twice by MACC. The first round of questioning concerned the alleged donation by the Saudi royal family to former prime minister Najib Abdul Razak, while the second round was in relation to welfare foundation Yayasan Akal Budi's funds.

It was reported that RM800,000 had allegedly been misappropriated from the foundation to pay credit card bills for Zahid and his wife.

Zahid had said that funds from the welfare foundation, of which he is the chairperson, had indeed been used to clear credit card debts but claimed that this was due to a mistake by his officer.

Zahid had previously been summoned for questioning regarding the foundation's funds three consecutive times this month by the agency, with the most recent session being on Oct 12.

Umno Supreme Council member Lokman Noor Adam is expected to hold a solidarity rally for Zahid in front of the MACC headquarters at 9pm tonight.

At press time, about 20 supporters, some of them wearing shirts bearing the words "Bagan Datuk" were seen gathering near the building.