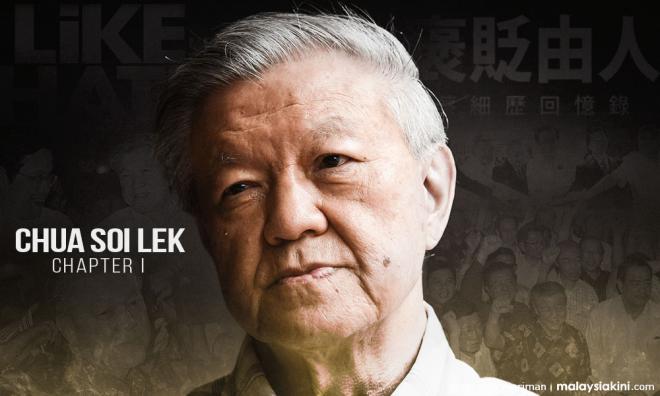 Yoursay: Nobody wants MCA anymore; why can't Chua get it?

YOURSAY | 'Why didn’t MCA confront Najib on 1MDB and his kleptocratic rule?'

Hope: These excerpts from former MCA president Chua Soi Lek’s memoirs ‘Like Me or Hate Me: Rising from the Political Ashes’ don't tell us anything new about the party. If anything, he is just confirming public perception of the party.

Just like Umno, MCA has long lost its teeth, after years of comfort under the BN umbrella. Can someone tell me what it is that MCA is fighting for now? Until one finds the answer, the party will remain irrelevant for a long, long time.

Concern: The subtitle for Chua’s book says “Rising from the political ashes.” And throughout these long, meandering and pointless excerpts, there’s this underlying notion that what is wrong in MCA is its leadership, not its very raison d'être.

It’s as if Chua or someone of his choosing riding back like a white knight will somehow save the party from utter irrelevance. I have news for you Chua: it won’t.

What else will it take for MCA to get the hint? I don’t see how the electorate can send a clearer message. You only have one parliamentary seat. Just one.

People used to call Gerakan and PSM irrelevant for having the same number. Nobody wants you any more, why don’t you get it?

And all this talk about how Pakatan Harapan needs a viable opposition for ‘check and balance’. Yes, of course it does, but can MCA do it with one seat? And why should that ‘viable opposition’ be you, or your fellow toadies in BN?

You are fighting a losing battle. Anything Ayer Hitam MP Wee Ka Siong says – even if it is sound (and chances are, it won’t be) - will immediately be negated by MCA’s recent past. And even then, the very basis of MCA as a chauvinist party makes it useless to this day and age.

Truenews: For your information, Chua, the one you talked to regarding corruption in Malaysia is the country’s most corrupted man and the most racist.

Why didn’t MCA confront him regarding 1MDB and his kleptocratic rule? Had MCA confronted him, then the party would remain relevant to the rakyat, but it chose to keep silent.

How MCA came to own The Star

Anonymous_1527819034: Chua says in his book that after a reorganisation, on the advice of BDO Advisory Services, the party would be able to save on income tax with its direct ownership of The Star?

This is madness. Why should a political party receiving income be exempt from paying tax? Fair enough, they can be exempt from income of a nature that only such organisations would receive, like membership fees and subscriptions, etc.

However, when they receive income like rentals and in the carrying on of any other kind of business activity, which if received by any other business entity or individual would be subject to tax, why should these types of organisations be exempt?

Does it also mean that when the goods and services tax was in place, they had received taxable incomes on which GST which were not collected? Same thing with religious organisations that are not subject to income tax on their incomes.

I have always argued that any activity carried out by anyone would be subject to tax, there should be no tax exempt.

Hope: Political parties don’t need to pay tax? Interesting. Then they shouldn't be allowed to do business also. Isn't that a loophole businesspeople can take advantage of?

FellowMalaysian: Chua accused others of being hypocritical when he was severely derided for his Batu Pahat dalliance.

But here, he expresses his strong belief that The Star newspaper “should be managed professionally and be free from political interference by party leaders”. Since when has the daily been free from being used and treated like the tools of MCA leaders?

After the 14th general election, there needs to be great change in the paper’s aspirations. Being well known as obsequious and servile to Umno, the paper is seeing its fortunes dwindle fast after the horror showing of MCA in the polls and the loss of BN's grip on the government.

They have to reinvent quickly, or otherwise find themselves bundled up like what had happened to Utusan Malaysia's fleet of news media.

“Like it or hate it,” so long as the paper remains under MCA's shackles, it will never see daylight as an independent news organisation.

Vijay47: How profound and pure Chua’s call for no political interference sounds, but we all know how the story ends.

Perhaps propelled by the winds of Operation Lalang, perhaps the desperation of a fading MCA, the paper mutated into being shameless, steadily becoming the object of widespread contempt and disgust.

Being biased is not a sin, but when it is executed at the cost of total disregard for truth, that newspaper becomes worthy only for being birdcage lining. As it now hovers above bankruptcy, in close companionship with Utusan, it might serve the paper well to remember that.

Unlike what Cassius advised, the fault indeed is in The Star.

Anonymous 7478653098613829: I briefly skimmed through the article as I am not interested in anything that has to do with MCA. I noticed that Chua, a number of times, tried to highlight his son, Tee Yong, and the fact that he is a chartered accountant.

My only recollection of Tee Yong was when he tried to emulate DAP’s Tony Pua or PKR’s Rafizi Ramli in highlighting scandals, but only those supposedly scandals related to the Pakatan Rakyat government in Selangor.

Tee Yong must have thought he could do one on the opposition as well and proceeded to exclaim that the Selangor government had an RM1 billion scandal on its hand.

He must have thought that he could be a hero for BN if he could single-handedly bring down the Selangor government with the scandal. His focus was the Talam Corporation.

He was then a deputy minister and was trying hard to attack the Selangor government, as what Pua and Rafizi were doing against the federal government. But alas, Tee Yong just does not have the intellect of Rafizi or Pua.

As DAP’s Ong Kian Ming put it, the initial confidence in his allegation is actually ignorance masked by his cockiness. So when the Selangor government published the Talam White Paper, Tee Yong quickly realised he had made a big boo-boo. Instead of being a hero, he had “drowned in a puddle of his own making.”