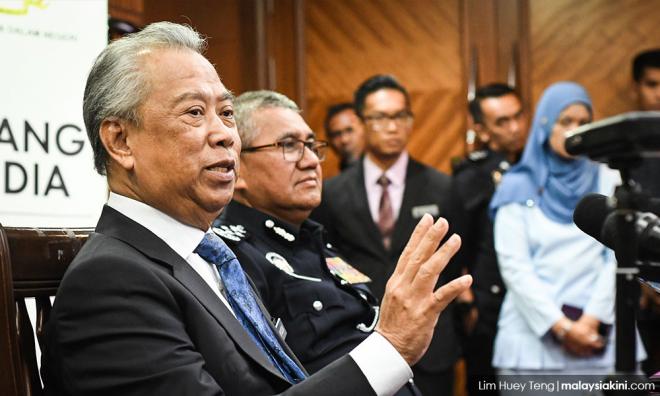 Police have determined that the group who accosted devotees at a Hindu temple in Subang Jaya were hired by lawyers who work for the developer that owns the land, Home Minister Muhyiddin Yassin said today.

"Those linked to the developer have not followed legal processes to take over the temple land as planned, in accordance with the law.

"Police investigations found that the lawyers of the developer had hired a group of Malay men to barge into the temple and take control of it before developers and police can arrive (to facilitate the land transfer) on the morning of Nov 26.

"Based on investigations, RM150,000 was handed to the group leader to carry out the intrusion and take over of the temple.

"Around 50 people were hired to do this work, and each received a payment of between RM150 and RM300," Muhyiddin said at a press conference in Putrajaya today.

It is understood that two lawyers working for One City Development Bhd were among the 21 individuals remanded by the police yesterday.

The intrusion in the early hours of Monday had sparked a riot after devotees who had gathered to protect the Sri Maha Mariamman temple in Subang Jaya clashed with the intruders.

Tensions from the initial riot boiled over to the next night, when rioters, who had gathered again on the pretext of defending the temple, attacked and seriously injured a firefighter.

Last night, a group of Malay youths had also gathered near the temple. According to one of the group members, who identified himself as Shahrizat Sahak, they had gathered to send a message that "Malays should not be trampled on".

At least nine of the youths were later arrested for failing to disperse when ordered to do so by police.

Muhyiddin said the "hasty and careless" actions of those linked to the developer were regrettable and illegal.

He said that without such actions, there would not have been any clashes between the group of Malays and temple devotees.

"I wish to stress that the incident at the Sri Maha Mariamman temple is not at all linked to race.

"Malaysians of all races have lived in peace and harmony for so long. It is not possible for one isolated incident involving a temple committee and a developer to be made a reason to sully race and religious relations in our country," Muhyddin said.

The home minister has called on police to take stern action against all who have broken the law in relation to the incident.

"This includes those who make provocative racial statements, spread false news that is slanderous and seditious, and organising any rally to stoke racial sentiments," he added.

He also urged those involved in the tussle over the temple land to work things out amicably and through legal means.

Plans to relocate the temple have been ongoing since 2007, after the land it was located on was purchased by One City.

In 2014, a consent judgment was entered in court, where One City and two rival camps vying for control of the temple agreed to relocate it to a plot of land three kilometres away.

However, devotees have continued to resist efforts to relocate the temple, which has been a Hindu prayer site since 1891.

The morning after: MCT Tower bears scars of riot aftermath

'Not our lawyers who hired thugs' - legal firm clarifies