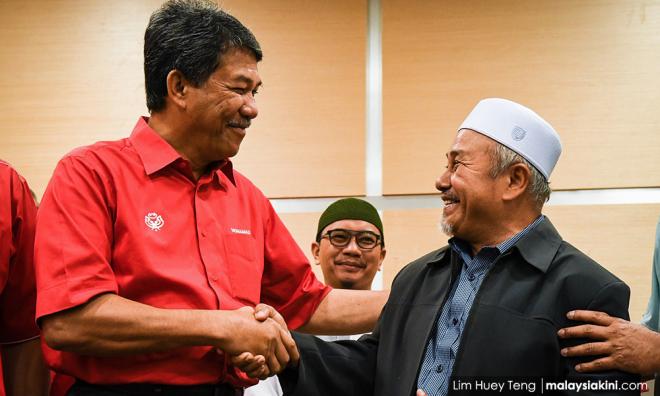 Umno and PAS 'tie the knot', and 9 things that happened yesterday

1. Umno and PAS announced that they have formalised ties between the two parties, with acting Umno president Mohamad Hasan likening the occasion to a “wedding ceremony”.

2. MCA and MIC have hinted that they will not attend the BN supreme council if the coalition’s secretary-general Nazri Abdul Aziz turns up. Nazri said he will come anyway and urged MCA and MIC to come along.

3. Khazanah Nasional lost RM6.27 billion before taxes last year, largely due to impairment of its investments in Malaysia Airlines.

5. The MACC raided the home of a senior official from the Batu Caves Sri Subramaniar Temple committee, allegedly in connection with an issue regarding a land deal.

6. The Competition Commission busted eight IT companies found to be rigging their bids to secure government contracts, and they now face fines totalling RM2 million.

7. The police have detained three people and are tracking down another for allegedly insulting Islam and Prophet Muhammad.

9. A draft bill to establish a media council is set for completion by the end of next month, said the Centre for Independent Journalism and Malaysian Centre for Constitutional and Human Rights.

10. An HIV-positive man in Britain became the second known adult worldwide to be cleared of the virus, raising hopes that a cure for Aids might be found.