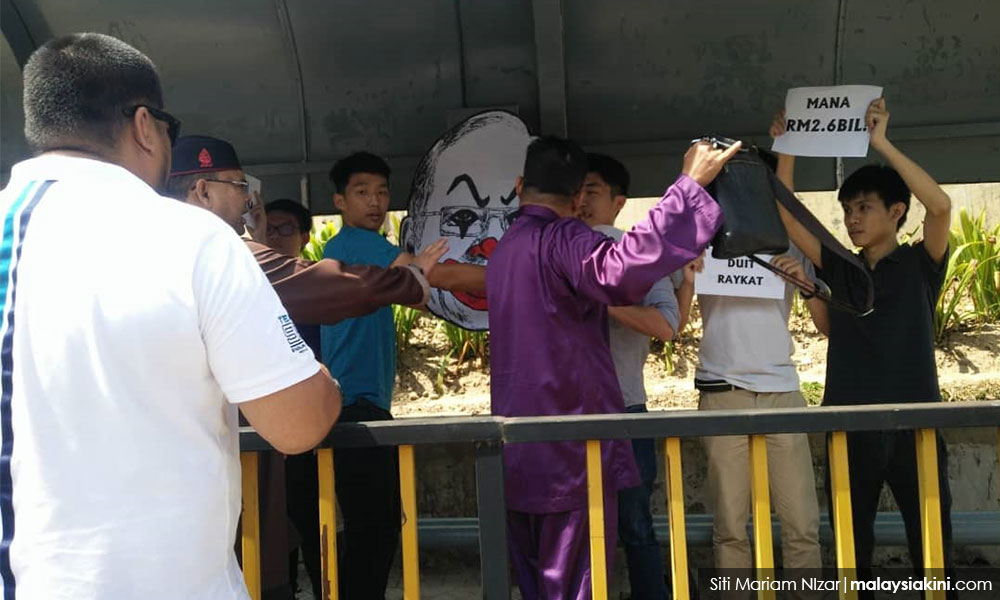 MCA Youth has condemned the incident outside Universiti Malaya in which student activists were manhandled by supporters of ex-premier Najib Abdul Razak.

"MCA Youth wishes to stress that Malaysia is a country ruled by law. We severely denounce anyone who resorts to violent methods when engaging with rally goers," he said.

"Anyone who has grievances with the rally-goers should seek legal redress from the relevant law enforcement agencies," said Ho.

"We would like to advise all Malaysians, especially politicians and netizens, not to provoke sensitivities between various ethnic groups," he said.

Ho urged the students to let the police investigate the incident impartially.

"MCA Youth’s legal bureau offers legal aid to any of the affected students who require it," he said.

"We will always defend the spirit and the rule of law, and anyone who is responsible must be held accountable.”

Yesterday, a small group of students protested against Najib from across the street of a restaurant near the Kerinchi entrance of Universiti Malaya.

They held up a cut-out of a clown-faced Najib caricature as well as placards condemning him over the 1MDB scandal.

The group was then confronted and assaulted by Najib supporters led by supreme council member Lokman Noor Adam.

One student, Universiti Malaya Association of New Youth (Umany) president Wong Yan Ke, was manhandled and put in a reverse chokehold during the confrontation.

The student group and Najib's supporters both lodged report after the incident.

Following the incident, Lokman and his followers harassed two Malaysiakini interns as they were unhappy with how it was reported.

Meanwhile, Amanah Youth leader Mohd Sany Hamzah said the violence of the Umno leaders showed their lack of political maturity by not respecting the people's right and freedom of expression.

"The students were just holding placards to express their feelings. This can be their way of expressing unhappiness over what was done by the previous government leader," he said.

"The Umno leaders who resort to violence yesterday are not rookies but they have been in politics for a long time," he told Malaysiakini.

"They should lead by example, especially for the students because they may inherit the leadership of the country one day," said the Taman Templer state assemblyperson.

DAP Youth chief Howard Lee has questioned why Umno leaders hate the youth so much that they acted roughly against the students.

He said Najib and his gang were adamant that they need not apologise even though Malaysians have voiced their rejection of violence and extremism.

"Other countries are fighting violence with acts of respect, love and loyalty, but Umno sticks to its 'know no shame' behaviour," he said.

mcayouth
lokmannooradam
student
protesters
Related Reports
Hands off journalists, says communications minister
a year ago
Najib’s gangsters a symbol of deeper rot in society
a year ago
Umno leaders, supporters harass M'kini interns after altercation
a year ago
Student manhandled after tempers flare over 'clown-faced' Najib cutout
a year ago

Advertisement
01
Umno Youth chief: No choice but dissolution if Muhyiddin' motions fail
12 Jul 2020
02
Anwar: Nothing personal against Dr M, we can agree on issues
12 Jul 2020
03
Adib's family upset with IGP, against revising decision on cause of death
12 Jul 2020
04
Govt and opposition blocs gear up ahead of Parliament showdown
12 Jul 2020