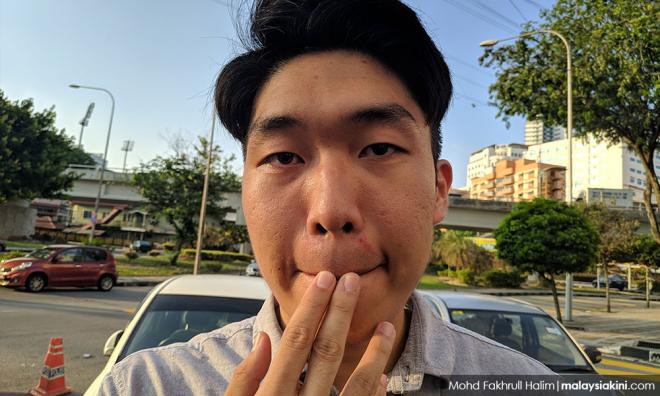 The Universiti Malaya (UM) student, who was allegedly manhandled during a protest against former prime minister Najib Abdul Razak yesterday, said he had participated in several protests against government leaders but were never harassed by their supporters.

"When Maszlee was appointed, I was there with Asheeq Ali Sethi Alivi and Siti Nurizzah Tazali and other student activists to protest against his appointment," he said when met at Pantai Bahru police station.

Maszlee's appointment as IIUM president in September 2018 was not taken well by the student groups and various protests took place after that.

Both Asheeq and Siti Nurizzah were arrested after a sit-in protest held at Education Ministry. However, Maszlee had his officer negotiated for the release of the student activists.

Maszlee later met the student groups in the same month and they again protested against him. He finally relinquished his post in November 2018.

Wong, who is also the University of Malaya Association of New Youth (Umany) president, said part of the protest was related to minimum wage and the reduction of government allocation for Universiti Malaya.

"Silent protest is a rightful practice of our democratic and constitutional rights. All the protests were carried out peacefully without any forms of harassment," he said.

"However, the situation went differently yesterday, where my Umany comrades and I were protesting silently about 35 feet away from the restaurant (Najib attended).

"We were attacked with all kinds of vulgar words and threatened with violence like 'pecah kepala'.

"So, I am here to ask Najib. If leaders are ready to be questioned, why can’t you too, as you always proclaimed yourself as 'boss'? What are you afraid of? Do you fear to lose your supporters when the truth comes around?" he questioned.

Wong, who held up a large clown-faced cutout was manhandled by Najib's supporters.

Umno supreme council member Lokman Noor Adam snatched the cutout and tore it while another group of supporters grabbed Wong in a reverse chokehold and attempted to pull him over the railing.

However, other supporters, including Lokman, intervened and stopped him.

Wong, who was accompanied by his lawyer Vinesh Nuthal, had lodged a police report against his assaulters at Pantai Police Station last night and had his statement recorded.

In the police report, Wong said Lokman and others aggressively approached him and few of them snatched away his placard.

"I was attacked from the back. I was put in a chokehold with bare hands by a man in white from the back. The other guys started to hit and slap my face, some scratched my face and body while others pulled my hair aggressively.

"I could barely breathe and almost fainted," he said, adding that he was later saved before being brought out of the scuffle area.

He alleged that several men chased them for a distance.

"We do not fear any suppression or threat by any parties, no matter if it is from government or opposition," he told the media today.