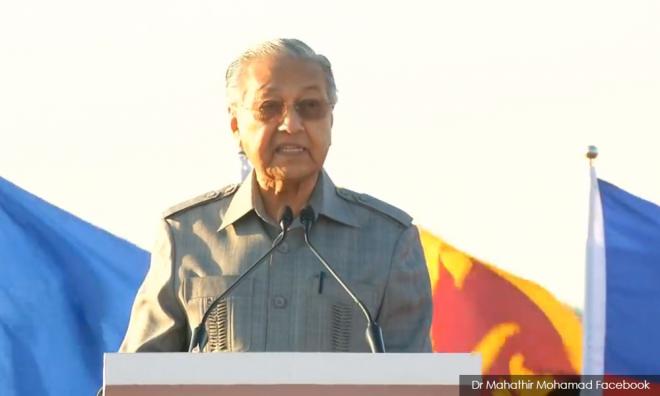 Marine resources being wasted due to absence of comprehensive policy

The prime minister said there should be an overarching policy encompassing all maritime aspects, such as security, safety, economy and the environment.

“If we continue to manage our seas in fragments, as it is now, the overlapping of jurisdictions and conflicts of interests among the sectors will never be resolved,” he said in his keynote address at the National Maritime Conference organised in conjunction with the Langkawi International Maritime and Aerospace Exhibition 2019 (Lima '19).

The prime minister drove home the point that it was high time for all maritime-related agencies to collaborate and consolidate necessary work processes, and this could be achieved through greater understanding, trust and open communication.

“Overlapping jurisdictions must be immediately addressed to overcome wastage of government resources. A coordinated and integrated approach should be the answer to strengthen maritime enforcement,” he said.

Mahathir noted that the country had passed no less than 15 Acts and Orders to manage its maritime space, the enforcement of which cut across more than 10 ministries and 31 maritime-related agencies.

The prime minister said a well-coordinated approach was needed to overcome challenges associated with enforcement activities which, in turn, could only be effective with sound Intelligence, Surveillance and Reconnaissance (ISR) capability.

In line with the United Nations' Sustainable Development Goals, he said, the government was keen on the principles of the Blue Economy where sustainable economic growth should always be in line with maintaining the ocean's health.

Mahathir underscored that optimising the country's wealth through maritime-based economic activities was interlinked with its ability to alleviate maritime security issues.

“Apart from the usual threats like maritime boundary disputes, our maritime security is also greatly challenged by non-traditional threats, such as illegal trafficking of both goods and humans, Illegal, Unregulated and Unreported Fishing (IUU fishing), piracy, terrorism, threats to the marine ecosystem like climate change and global warming, and pollution from shipping activities and land-based pollution,” he said.

These activities had greatly impeded Malaysia's economic activities and inadvertently impacted on the total national revenues, he said, citing the example of encroachment by foreign fishing vessels which had led to massive income loss apart from irreversible damage to the country's marine ecosystem.

“It was reported last year that we lost approximately RM6 billion annually from illegal fishing activity, or IIU fishing, in the East Coast of Peninsular Malaysia alone,” Dr Mahathir said.

The prime minister said a lot more had to be done and more challenges to overcome for Malaysia to become a true maritime nation.

“It cannot be done overnight, but we have also undergone much as a nation to be able to identify and find solutions for most of its maritime-related issues.

“Our vision to become a maritime nation is progressively becoming a reality, provided we are willing to join hands and march forward together,” he said.