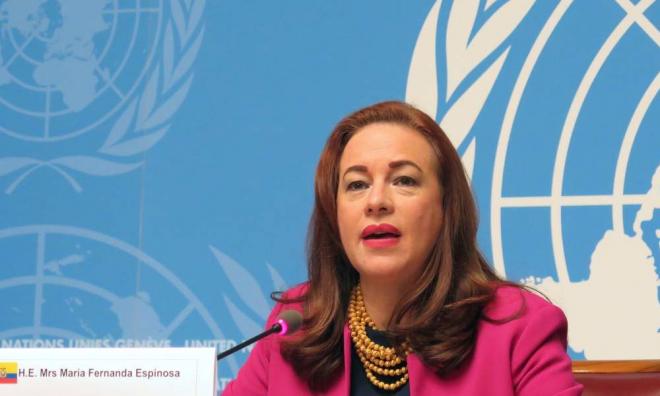 A new, ambitious environmental treaty is expected to be ready for a vote when the United Nation's annual summit begins in September, the president of the UN General Assembly said on Friday.

Maria Fernanda Espinosa, who is nominally in charge of the 193-member body, said negotiations underway could soon produce a definitive text for the Global Pact for the Environment, which is supposed to plug holes left by prior treaties.

As president of the General Assembly, Espinosa represents all member states, a role that differs from that of the UN Secretary-General, Antonio Guterres, who acts as the chief of the UN itself.

"I hope we will have something in hand," she said in an interview. "A finalised version."

It is mainly a ceremonial post that nonetheless carries a high profile and important procedural functions.

A geographer by training, she has made environmental action a key pillar of her agenda, last month convening a global gathering on climate change and poverty.

A preliminary draft of the new pact, introduced by France and released in 2017, contains clauses that establish the right to a clean environment and commits parties to create judicial processes and other means to hold polluters accountable.

The treaty is being negotiated in Nairobi, where UN Environment is headquartered.

Negotiations of the treaty were "very strained," Espinosa said.

Disagreements centred around questions of accountability and reporting on progress, she said.

"There are different fears and different understandings of how far the pact should go," Espinosa said.

The pact has received mixed reviews from some legal experts, who question whether a one-size-fits-all treaty can deal with a myriad of holes left in measures addressing distinct environmental problems.

But it has received the backing of Guterres and has been promoted by French President Emmanuel Macron and former California Governor Arnold Schwarzenegger.

The new accord would give more teeth to global environmental regulations coordinated by the UN beyond the landmark Paris Climate Agreement, Espinosa said.

That 2015 pact, agreed by nearly 200 nations, aims to keep the increase in average world temperatures to "well below" 2 degrees Celsius (3.6F) above pre-industrial times, mainly by reducing the use of polluting fossil fuels.

The Global Pact for the Environment would create a solid baseline for implementing other environmental protections like the UN Convention on Biological Diversity and the Statement of Forest Principles, she said.

The Forest Principles, adopted in 1992, is a set of guidelines on the sustainable management of forests worldwide.

Short of adopting a "holistic" approach like the Global Pact for the Environment envisions, other UN goals on climate and poverty risk failing, she said.

"If you don't fix the relationship between society, nature and the economy, it won't work," said Espinosa.

When hell freezes over, Malaysia will not be spared
2 Feb 2019
Harapan gov't must put its foot down on toxic wastes
10 Apr 2019
Without new terms, US still leaving climate pact
19 Sep 2017
Tears after Paris accord to limit global warming to 2 degrees C
13 Dec 2015
M’sia to push for climate change agreement
6 Dec 2015