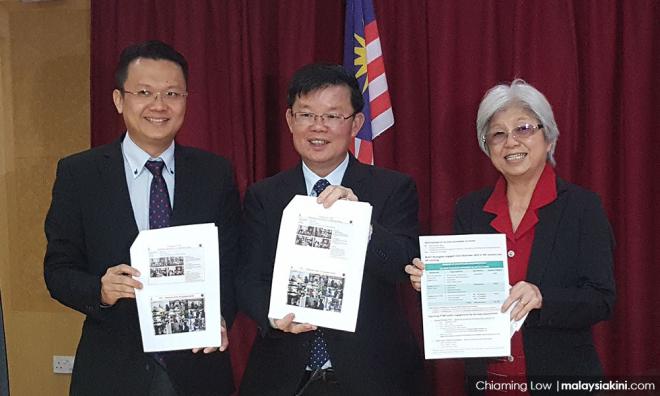 Five reasons why the PTMP is a white elephant masterplan

Penang seems very elusive when it comes to PTMP. One wonders whether the Pakatan Harapan federal government has developed selective hearing to rational opposition from the public, and believe that they are right simply because they won in last year’s general election.

Wira: Teoh says: “While the federal government has reiterated its commitment to reduce the high debt levels of the country by scrapping or renegotiating projects inherited by the previous administration, Penang continues to spend lavishly without batting an eye.”

Teoh, why no mention that the PTMP is going to be entirely self-funded? It is not going to cost taxpayers a sen. I hope critics like you can make a fair comment on this.

What's wrong with Penangites spending money from land sale to fund their own infrastructure development? Other states should be asked to do that as well.

You also ask why 367,379 Penangites would choose to squeeze themselves in the reclaimed islands by 2030 when there are less dense areas available elsewhere in the state?

I’ll tell you why. The state government hardly owns any more land banks for housing on the island. Those are already in private hands.

Moreover, Penangites overwhelmingly prefer to live on the island, even though there is cheaper housing on the mainland.

The land banks on those islands are to be owned by the government, and they can allocate cheaper land for public housing.

But what if the land cannot be sold at target price? Then will there not be enough money to pay for the project? Then what?

The contractors can walk away, and politicians can retire. But will Penangites still have to pay through their noses?

FellowMalaysian: Teoh's figures are highly flawed and prejudiced. For example, the projected population density of 21,636 per sq km in the islands is higher than Singapore's 11,400.

He is comparing a tiny development area of 18 sq km to that of the whole of Singapore, which includes green lungs and water catchment areas. Instead, Teoh should compare PSR with, say, the Ang Moh Kio housing estate, and I can bet you PSR's projected figure won't even achieve half of that area’s density.

I am not too concerned even if PTMP does not achieve its target of 40 percent public transport modal share. Penang has less than one million people residing on the island, and a mass public transport system like the MRT or multi-lane motorways are not necessary and commercially not viable.

The network of light- to medium-capacity public transport systems proposed under PMTP, such as the Bayan Lepas LRT, Paya Terubong and Tanjung Tokong monorails, and George Town BRT are adequate.

And to counter Teoh’s concern that the costs of the Pan Island Link 1 (PIL1) highway and the Bayan Lepas LRT are enormously high, I think he should look at the big picture, as the financing of the entire network of public transport is to be generated and footed by the state government.

The construction costs shall be paid through the sale of the reclaimed land, and a workable financing package needs to be generated and established with financiers before physical works can proceed.

This means that financing costs are likely to be higher than normal projects, as the revenue expected to be generated from the sale of PSR land which will be used to pay contractors will likely be paid on a deferred basis.

I totally disagree that PMTP will become Penang's white elephant. Instead, Penangnites ought to rejoice and be pleased with the government that planned and cared for the well-being of its people.

Unlike the Klang Valley, which is crisscrossed with many tolled expressways, Penangnites on the island enjoy toll-free highways, and PMTP will ensure that they continue to do so.

What could be a better solution to alleviate the agony of the motorists on the island, who have been suffering for so long?

JBKing: Before the construction of the North-South Expressway commenced during Prime Minister Dr Mahathir Mohamad’s first term, there were loads of armchair critics. Same here.

The PTMP is certainly not planned to cater to the organic growth of the Penang population. In 10 years’ time, the population of the state may well comprise just 10 percent locals.

Teoh compares the LRT line to the old Victoria Line of the London Underground. When that was built, far fewer people used it compared to today. The PTMP will attract a lot of people coming to Penang to live and work and retire.

Besides, if traffic congestion is here to stay after the full implementation of the PTMP, as Teoh states, isn't that a blessing in disguise? Just like when we say after working so hard to cut down on taxes, we still pay more tax. It shows earnings growth.

My advice is to look into affordability. If Penang can afford such an investment, why not. Do it later and you end up paying more.

Are Penangites prepared to be like Singapore, with public transportation the main means of travel, and congestion charges for vehicles? Cars coming into the island paying a fee, developments to be spread out, and all tourist attractions covered by efficient public transport?

Oscar Kilo: Since Teoh seems to be an expert in transport planning and urban development, in addition to criticising the PTMP, he should also provide his analysis and diagnosis of Penang’s problems and his recommended solutions.

We would like to hear more balanced views. Otherwise, Teoh is only spewing negativity, despite sounding like a smart guy.

ABC123: Highway is wrong. LRT is wrong. Monorail is wrong. Reclaim land from sea is wrong.

So what is right?

Nobody seems to be coming up with any solutions. This article is just a long list of complaints with zero ideas, zero proposals and zero solutions.

The Penang government is always under constant attack. Everything they do is wrong. But miraculously, Penang is still the best run and best-performing state. Must be pure luck, I guess.