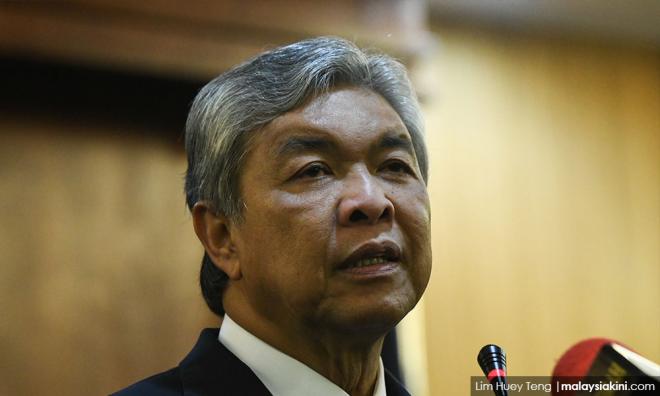 Ahmad Zahid Hamidi had threatened legal action against contractors if they failed to complete a new army camp in Hutan Melintang by August 2017.

According to the special investigation committee on procurement, governance and finance report on land swap deals involving the Defence Ministry, Zahid issued the warning in a special meeting he chaired on July 18, 2017, in his capacity as the then-deputy prime minister.

"He reminded all parties involved to complete the camp before or in August 2017. Failing to do so would see action taken," read the report.

Hutan Melintang sits in the parliamentary constituency of Bagan Datuk, which Zahid won for the sixth time in the 2018 general election with a 5,041 majority.

Of particular note in the report was that an Election Commission representative not only sat in on said meeting, but paid three visits to the site to ensure work progress.

Additionally, the EC representative said that voter registration could only take place by August or September 2017, the cutoff time for voters' names to be registered to be eligible to vote in May the following year.

According to the report, the representative highlighted several criteria that needed to be fulfilled before a voter registration could take place – physical completion of the camp, as well as that of infrastructure, including fences, kitchens and the weapons store.

However, the report added, army personnel were shifted to the new camp in August and September 2017 without the certificate of completion and compliance (CCC) being issued.

The camp was only 42.4 percent completed as of August last year. The government has since instructed army personnel stationed there to move out.

The Hutan Melintang camp was a private sector initiative dating back to 2010, and was not listed in the 10th and 11th Malaysia Plan.

The first proposal to build the camp was shot down by the cabinet, which disagreed with its method of payment.

In 2015, another developer proposed to build the camp to house the Standard Infantry Battalion and the Royal Artillery Regiment on a 142ha site. The project was worth RM350 million.

Zahid, in a letter dated April 15, 2016, had instructed the Public-Private Partnership Unit to hasten the project. Four months later, he announced that the government had greenlit for the project.

However, the developer later pulled out from the project due to changes made in the swapped land deal.

In October 2016, another company sought the support of the government to implement the project via a land swap, to which Zahid replied "no obstruction."

Zahid also wrote on the same letter that "the project must be implemented swiftly."

The RM132 million project was then approved in principle by the cabinet in February 2017. In return, the developer obtained 18.6ha of land in Lahat, Perak and in Rasah, Negeri Sembilan.

"The EC is an independent entity and should not be used by any ministry or executive member for the purpose of shifting voters," said the report.

Bagan Datuk became a 60 percent Malay-majority seat with 47,309 voters in 2018 due to the new army camp and the EC's redelineation exercise. In 2013, the Malay composition for Bagan Datuk was at 55 percent.

In February, it was revealed that land swap deals involving the ministry had resulted in RM500 million in losses and leakages.

This occurred through 16 projects dating as far back as 1997 involving 1,186ha of Defence Ministry land valued at RM4.75 billion, with project costs of RM4.88 billion.

On May 9, Defence Minister Mohamad Sabu tabled a 50-page summary of the report at the Dewan Negara.

The full report on the 16 land swap deals is being uploaded to the ministry's website this week.

Malaysiakini has contacted Zahid, but was unable to obtain his response at press time.