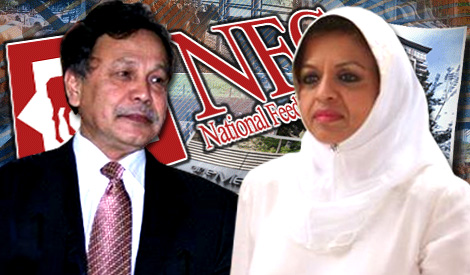 Putrajaya sues for NFC loan, and 7 other things that happened yesterday

1. The government has sued the husband and three children of former Umno Wanita chief Shahrizat Abdul Jalil to recover the RM253.6 million owed through the National Feedlot Centre project, but NFCorp chairperson Mohamad Salleh Ismail said the company had already pledged to repay the loan.

2. Business leaders appear to differ on whether Mandarin literacy requirement amounts to racial discrimination in the job market, but both sides agreed that more studies are needed to determine the facts.

3. A friend of the fugitive Low Taek Jho’s family has criticised the government for seizing the Low family mansion in Tanjung Bungah, Penang, saying that it predates the formation of 1MDB and is not linked to the scandal.

4. Inspector-General of Police Abdul Hamid Bador has reiterated his warning to district police chiefs not to collect funds for “Hari Raya celebrations”.

5. Former Sabah chief minister Yong Teck Lee denied there are “hidden hands” behind his constitutional challenge against a Royal Commission of Inquiry on alleged judicial misconduct after a government source suggested that the suit may have been instigated by those who fear the RCI might open a can of worms.

6. Housing and Local Government Minister Zuraida Kamaruddin said she will have the final say on the appointment of a lawyer from the Attorney-General’s Chambers to represent her ministry in the inquest into the death of firefighter Muhammad Adib Mohd Kassim, replacing a private lawyer in the case.

7. Malaysia Airlines Bhd CEO Izham Ismail is opposing the idea of shutting down the national carrier.

8. As the Hari Raya exodus continues, 90 deaths due to road accidents have been recorded since Wednesday last week when the police launched the Ops Selamat 15 campaign.

kiniroundup
Related Reports
M'sia doesn't want to choose between US and China - Liew
a year ago
Aidilfitri falls on Wednesday
a year ago
Come and study in Malaysia, says Mahathir
a year ago
'Like waiting to buka puasa' - IGP appeals for patience with Jho Low's arrest
a year ago