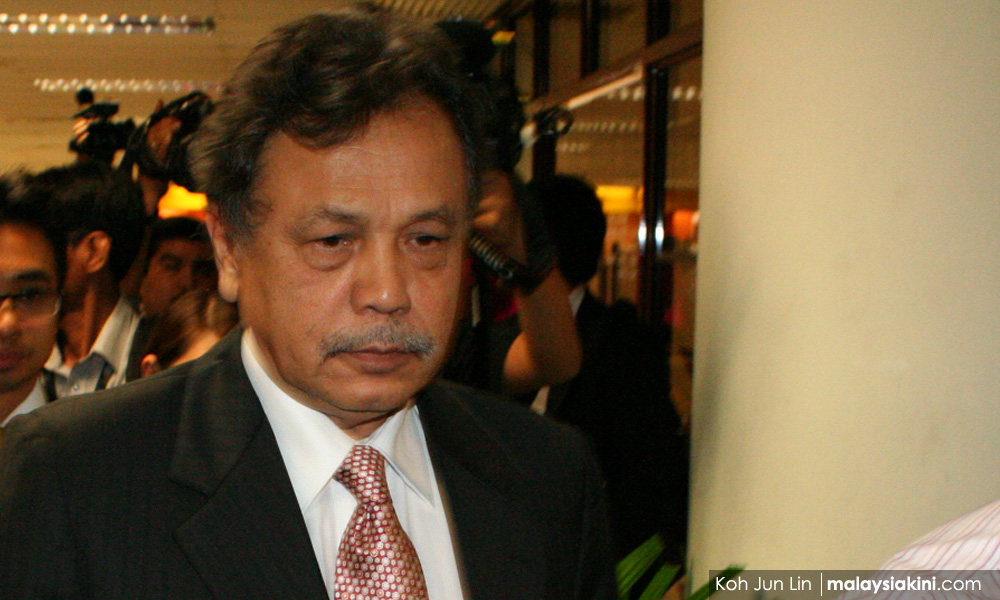 Yoursay: Salleh, willing to repay is no reason for withholding lawsuit

YOURSAY | 'Agreeing to pay is not payment itself. Pay up and the AG will have no grounds to sue...'

While waiting for the project to start Salleh and the board decided to invest loose funds sitting in the bank in condominiums in Kuala Lumpur and Singapore. No crime here.

If the so-called whistleblowers did not raise an alarm, the original business could have succeeded.

Anyway, the point to appreciate is that neither the government of the day, Salleh, nor his children committed any crimes.

The government is proposing to sue. For what? To recover money lent. Why do this when Salleh has found a buyer who is willing to take over the company and make a full refund, including interest at two percent.

Let the Finance Ministry handle this with advice from the attorney-general (AG).

Meerket: Salleh did not repay the loan. Yes, no crime here but it’s a civil default, hence the government's recovery action.

Salleh appointed his children to the board. It’s a clear conflict of interest. Crime or not, it’s up to the court to decide, if and when that happens.

Paid fat fees to directors. Clearly, abuse of funds, especially since the project hadn't taken off. Again, no conclusive evidence either way, but there is a strong suggestion of impropriety and criminal breach of trust (CBT).

Invest in condos. Okay, per se. But what happened to the rental collected from the condos? Have they been accounted for? If not, it could be CBT again.

If whistleblowers had not raised an alarm, NFC could have succeeded. This is pure conjecture. Please give your reasons for this assertion.

You are mixing up committing a crime and suing for recovery. Suing for recovery can happen anytime on default of repayment. Willing to repay is no reason for withholding the action.

Crime is another matter. If any crime is committed, regardless of whether the money has been recovered, the police or MACC can investigate and charge the perpetrators accordingly.

So, the worst-case scenario for those involved is repayment of the loan, including interest, fine and jail term. I am waiting with bated breath.

Anonymous_49d8b96c: In the first place, if not because of Umno cronyism, the NFC would not be awarded to them.

You really think that all the board of directors and management staff who draw fat salaries and perks have the commercial experience and technical expertise to carry out this venture?

Yes, no crime and nothing illegal here. The fact remains, the loan is now in default for many years, not many months. Try defaulting a bank loan on your car or mortgage loans.

The right question should be: Why the government took so many years to sue for debt recovery? These are taxpayers’ monies.

Mat MD: Indeed, it is proper that the government should sue the company for immediate recovery of the loan, which remains pending for so long.

Once the court decides that the loan should be settled immediately and if the company defaults, bankruptcy proceedings could be instituted, followed by the seizure of the company's properties.

Anonymous 770241447347646: The issue here is not the restoration and restructuring of NFC. The issue is the refund of the funds borrowed.

If there are funds in whatever new company that wants to take over, then it is only natural the funds be returned first. If the monies are returned, then there is no issue of the government suing you.

We only hear the statement NFC has agreed to pay back the money, but can we see the hard cash, please?

You were given a low-interest loan of RM250 million for a specific purpose and you misused it and now when repayment is demanded, you "offered to pay".

What are the details of this "offer"? Does it require the government to give further loan to repay this loan? What other concessions must the government give for full settlement?

Give the details and the public can judge whether the government is justified in taking legal action against you.

No spin can convince the public that you are victimised, like what the infamous alleged thief of colossal proportions is trying to do.

Anonymous_b3cdcd05: Returning the money does not absolve Salleh and his children from having abused the government facility. How much did Salleh pay back over the years?

The soft loan at very low interest was given to develop the National Feedlot Corporation. Not only there was no development of the NFC, but RM118.04 million was diverted to other investments and all four of them were paid obscenely high salaries and perks that did not commensurate with their output.

Regardless of whether there are others interested to buy over NFC, Salleh and his children must be held accountable for the return of all monies due.

Anonymous_49d8b96c: Any settlement proposal, until and unless fully agreed by parties to the contract, does not prejudice the creditor the right to sue to recover the debts. Nothing abnormal, illegal and unreasonable about it.

In any case, the loan was in default already for many years, not to mention that the loan granted was used for purposes unrelated to the original intent.

Grrrrrrrrrrrrr 2019: The decision to sue is a correct one as it is pre-emptive and to safeguard the loan given by the government. Instead of wasting time talking to the press, just pay up and the suit will be dropped.

And please realise this is not Courts Mammoth you are dealing with. No instalment payment over 20 years, ya? Are you delaying in the hope of BN taking over after GE15?

yoursay
national feedlot corporation
Related Reports
NFC - what a bull
a year ago
Putrajaya sues Shahrizat's husband, children to reclaim RM253m loan
a year ago
Khairuddin urges MOF to consider company interested in buying NFC
a year ago
NFC may be rebranded after takeover, says minister
a year ago