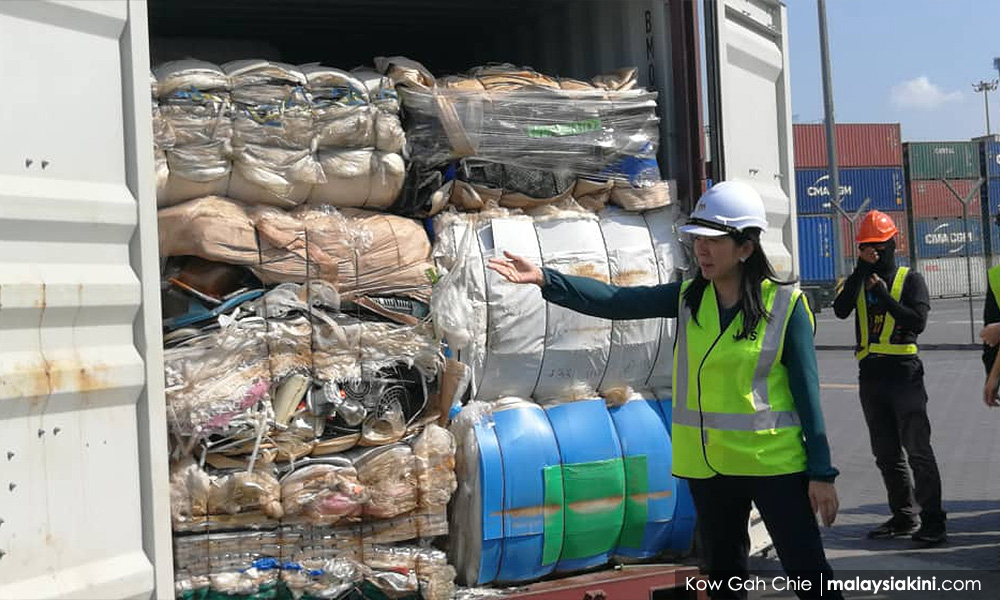 The entry of the world’s plastic waste that is polluting Malaysia is an issue that should not be taken lightly.

Over the past year, 157,299 tonnes of plastic waste was shipped into Malaysia, an increase of 273 percent compared to the previous year.

Even this year, several allegedly illegal plastic waste disposal sites were found in Ipoh, Perak; Sungai Petani, Kedah; Jenjarum, Selangor, besides more than 60 containers found at West Port, Selangor, containing plastic waste believed to have been smuggled into the country and abandoned by local importers.

Recently, Energy, Science, Technology, Environment and Climate Change Minister Yeo Bee Yin said all the 60 containers containing 3,000 tonnes of plastic waste would be sent back to their countries of origin.

This is in contrast to the statement by Housing and Local Government Minister Zuraida Kamaruddin late last year, who reportedly said the plastic waste processing business was a RM30-billion-a-year industry that cannot be ignored.

Hence, where is the country's direction on this issue? Malaysian Nature Society president Prof Dr Ahmad Ismail said if the government seriously wanted to venture into the plastic waste processing industry, it has to be done carefully, as the country has been ranked eighth in the world for contributing towards marine pollution caused by plastic waste.

The lecturer at the Department of Biology, Faculty of Science, Universiti Putra Malaysia, said the chemicals generated from the plastic waste were clearly polluting the air, water and soil; besides, its combustion products pose a risk of contaminating breast milk.

“Production of ethyl polybrominated diphenyl ether (PBDE) and fire-resistant materials that are widely found in television sets and computers can alter sex hormones, reduce fertility and hinder ovarian development if exposed to it for long,” he said.

Charting a path forward, he said with high costs and limited area, new technologies in waste disposal should be introduced by the government, including the Mechanical Biological Treatment technology being used in Germany and the Netherlands. Even China is now using the same technology.

Meanwhile, EcoKnights president Yasmin Rasyid was of the opinion that the import of contaminated plastic waste should be banned, stressing that the government should protect the people and regulate the corporates and not the other way round.

“The profiteering perspective focuses on just economic gain for certain sectors, while disregarding the harm it can bring to the people and the environment.

“We need to change the way profits are made... This shows a lack of social innovations on the part of the plastics industry. Disposable plastics need to go. Economic growth is short term; human health and the planet need to be protected,” she said.

According to National Solid Waste Management Department assistant director, Wemi Kalsuna Katerun, based on the latest statistics, there are only 62 companies with Approved Permits (APs) compared with 314 before the government set stricter conditions for the granting of APs on Oct 26, last year.

Sahabat Alam (Friends of Nature Activists Society) activist Shakila Zain said the country's garbage disposal industry was still unable to accommodate domestic waste in terms of cost and also size of the landfill area, much less take over the task of managing waste from outside.

“In 2017, garbage disposal sites were reduced from 289 sites to 113, and this figure is alarming as there is no alternative proposed to dispose of the garbage. For the record, there is no addition of recycling sites as well.

“We are not a zero-carbon country like Bhutan and so are able to take over the responsibility of reducing the amount of garbage or carbon from other countries,” she said.

“If properly processed and imported according to industry requirements, there is no problem. The problem is when the garbage imported from countries is not for recycling, but waste that is dumped at illegal disposal sites,” he said.