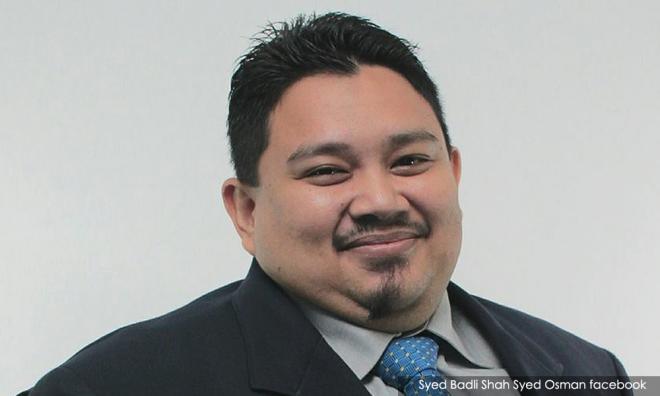 PKR Sabah Youth deputy chief Blisson Zainuddin has come under fire for hinting that there could be an internal plot against Azmin Ali with regard to the sex video scandal.

National PKR Youth vice chief Syed Badli Syah Syed Osman lambasted his remarks as malicious and accused him of wanting to create a rift in the party.

He was also puzzled that Blisson is now defending the PKR deputy president when he had purportedly sent Badli Whatsapp messages that indicated otherwise.

In a media statement, Badli reproduced the alleged Whatsapp messages which mentioned Haziq Abdullah Abdul Aziz, who confessed to being the person in the leaked sex videos. He had also claimed that the other person in the clip was Azmin.

Also released were photographs Blisson had taken with Haziq.

“Only two days ago on June 12, he (Blisson) sent me text messages which read: 'I was with Haziq that day', 'He really wants to have a go at Azmin', 'Azmin will be finished' and 'This is it'.

"He had also admitted that he did not support Azmin," he added.

Malaysiakini is trying to reach Blisson for his comments on Badli's claims.

Earlier, Blisson had told a press conference in Kuala Lumpur that Haziq pestered him for details regarding Azmin's activities and schedule during the Sandakan by-election last month.

In his confession video, Haziq claimed that the sexual encounter took place in Sandakan during that period.

Blisson, who also made a statutory declaration on the matter, denounced the video as slander.

He also hinted at an internal plot, claiming that Haziq was allowed to contest in the PKR polls despite being a new member and he was close to PKR vice-president Rafizi Ramli's faction.

He also questioned why Haziq was not sacked or suspended from the party after admitting to having committed a crime and defaming a senior leader.

He said this gives the impression that Haziq is being protected by certain PKR leaders.

Meanwhile, Badli said he was clueless as to the reason Blisson had sent him those Whatsapp messages.

“I don't understand what was his intention because I have no interest in entertaining lewd politics and slander.

"Thus, it is puzzling as two days ago, he said he does not support Azmin, and today he comes forward with an accusation linking another individual (Rafizi) in this case," he added.

Earlier, Rafizi told Malaysiakini that he did not want to become involved in the matter.

Azmin has described the videos as a diabolical plot to ruin his political career whereas Prime Minister Dr Mahathir Mohamad dismissed them as fake.