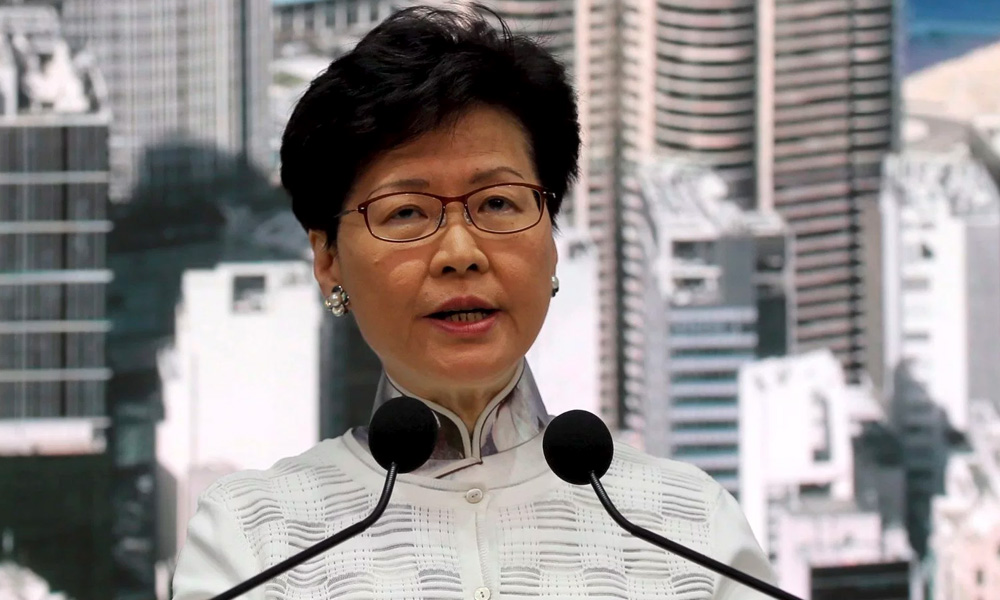 Hong Kong leader Carrie Lam on Tuesday signalled the end of a controversial extradition bill that she promoted and then postponed after some of the most violent protests since the former British colony returned to Chinese rule in 1997.

In a press conference, Lam apologised for the turmoil, but refused to say the bill would be “withdrawn,” only that it would not be re-introduced during her time in office if public fears persist.

This was the strongest indicator yet that the government was effectively shelving legislation that would allow people to be extradited to mainland China to face trial, even if it fell short of protester demands for the government to scrap the bill altogether.

“Because this bill over the past few months has caused so much anxiety, and worries and differences in opinion, I will not, this is an undertaking, I will not proceed again with this legislative exercise if these fears and anxieties cannot be adequately addressed,” Lam told reporters.

Lam, appearing both contrite and defiant, used much of the same language as a previous press conference on Saturday when she announced a postponement of the bill.

A day later, about two million people spilled on to the streets, many demanding that she step down.

Lam, asked repeatedly whether she would quit, refused to do so, saying there remained important work ahead in the next three years, which would bring her to the end of her current five-year term of office.

“After this incident, I think work in the next three years will be very difficult... but myself and my team will work harder to rebuild public confidence.”

Lam apologised for plunging the city into major upheaval, saying she had heard the people “loud and clear” and would try to rebuild trust.

But some protest organisers and opposition Democrats said Lam remained tone-deaf to public demands, namely that she state categorically a retraction of the bill, step down immediately and pledge not to prosecute any protesters on rioting charges.

“Lam is continuing to lie,” said Jimmy Sham, the convener of the Civil Human Rights Front.

“We hope the people of Hong Kong can unite with us... to keep working hard to withdraw the evil law,” he told reporters.

Alvin Yeung, a democratic lawmaker, said Lam had failed again to lower the political temperature in the city of seven million.

“Hong Kong will not accept this,” he said.

Lam’s climb-down, with the approval of China’s Communist Party (CCP) leaders, was the biggest policy reversal since 1997 and presented a new challenge for Chinese President Xi Jinping (photo) who has ruled with an iron fist since taking power in 2012.

Since the proposed amendments to the Fugitives Offenders’ Ordinance were first put to the legislature in February, Lam has repeatedly rebuffed concerns voiced in many quarters, including business groups, lawyers, judges, and foreign governments against the bill.

Critics say the bill would undermine Hong Kong’s independent judiciary and rule of law, guaranteed by the “one country, two systems” formula under which Hong Kong returned to China, by extending China’s reach into the city and allowing individuals to be arbitrarily sent back to China where they couldn’t be guaranteed a fair trial.

Chinese courts are ultimately controlled by the CCP.

Lam issued an apology on Sunday night through a written government statement that many people said lacked sincerity.

It failed to pacify many marchers who said they no longer trusted her and doubted her ability to govern.

Lam, a career civil-servant known as “the fighter” for her straight-shooting and tough leadership style, took office two years ago pledging to heal a divided society.

Some observers say she is unlikely to step down immediately, but any longer-term political ambitions she may have harboured are now all but dead.