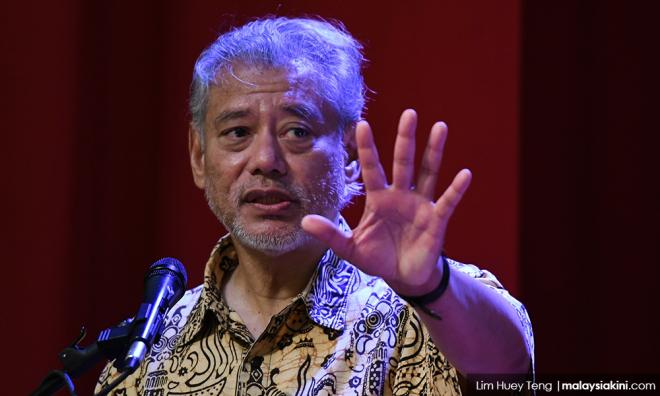 We’ll face challenges to our economy with internal resiliency

MP SPEAKS | Jomo Kwame Sundaram’s statement to reporters at the sidelines of the Malaysian Economic Convention 2019 on June 17 was widely reported in the mass media.

Specifically, Jomo (photo, above) said: “This is going to be a very, very tough time because the external situation is very bad and is deteriorating almost on a daily basis.” He also added that “many of these problems are beyond the control of the Malaysian government”.

I concur with Jomo’s view that the external economic circumstances continue to be very challenging, especially in the light of recent developments in the US-China economic relationship. I also agree that many of these challenges are caused by factors beyond the control of the Malaysian government.

When the US-China trade war was restricted to the area of tariffs on goods and services, Malaysia could at least benefit from some short-run trade and investment diversions. This can mitigate some of the longer term negative consequences of the trade war. For example, Japanese financial services company Nomura has estimated that Malaysia will be the fourth largest beneficiary of the US-China trade war as a result of trade diversion.

But when the United States government threatens to prevent US companies from doing business with Chinese companies such as Huawei, the impact on countries like Malaysia can only be negative. For example, the reduction in Huawei’s revenue, by as much as US$30 billion (RM124.8 billion) will have a negative knock-on effect on other companies in its supply chain, including US companies.

Broadcom, for example, is projecting a reduction in its revenue of US$2 billion as a result of the actions taken (or will be taken) against Huawei by the US administration. The ripple effect on Malaysia, especially in the Electrical and Electronics (E&E) industry could potentially be significant.

It is unfortunate that some quarters, including the former prime minister, have chosen to take Jomo’s comments out of context to attack the government, instead of recognising the serious external challenges which the country is facing.

Thankfully, all is not doom and gloom for the Malaysian economy. There are signs that our diversified economy can withstand some of the global challenges ahead.

After two months of negative year-on-year growth, exports for the month of April 2019 increased by 1.1 percent to RM85.2 billion. For the months from January to April 2019, exports decreased marginally by 0.2 percent to RM321.26 billion.

Despite the US-China trade war, our exports to China from January to April 2019 still grew by 2.8 percent to RM42.7 billion. I am cautiously optimistic that the overall export figures for the first half of 2019 will show a positive growth.

At the same time, realised investments, according to the Q1 2019 Balance of Payment Figures, for FDI, increased to RM21.7 billion as compared to RM12.9 billion in Q4 2018. These FDI were largely channelled to the Services, Manufacturing, Mining & Quarrying sectors.

I agree with Jomo and Allen Ng (photo), chief economist at the Securities Commission, who also spoke at the same event. They both emphasised the importance of spurring domestic direct investments (DDIs). At the same time, we cannot deny that FDIs, whether in the manufacturing or services sector, can increase the value-added contributions and hence, the number of higher paying jobs available to Malaysians.

These FDIs will also have spillover effects, for example, in integrating domestic firms into the larger global supply chain. Many Malaysian companies have become globally competitive players as a result of the supply chain linkages formed via the multinational corporations which have made long-term investments in Malaysia.

My ministry, together with our investment promotion agencies, Malaysian Investment Development Authority (Mida) and InvestKL, will continue our efforts in attracting good quality FDIs to come to Malaysia. We will also continue to encourage DDIs by, for example, providing matching grants through schemes such as the Domestic Investment Strategic Fund (DISF).

Malaysia’s Manufacturing and Industrial Production Figures for April 2019 are also encouraging. Manufacturing sales in April 2019 grew by 6.8 percent on a year to year basis to RM69.8 billion, driven by increases in the sales of non-metallic mineral products (7.5 percent), E&E products (6.7 percent) and petrochemical, chemical rubber and plastic products (5.8 percent).

Looking ahead, there are some positive signs of regional economic resilience. The Asean Manufacturing Purchasing Managers’ Index (PMI) increased from 50.4 in April to 50.6 in May. Although this is a small increase, it is still an encouraging sign given the global economic narrative. At the same time, the Caixin China General Manufacturing PMI remained at 50.2 in May 2019, signalling that fears about China’s impending slowdown have been perhaps somewhat exaggerated.

One should not underestimate the internal resilience of China’s domestic economy. It provided a much-needed boost to the global economy during the financial crisis in 2008.

Ten years later, China is a much bigger and more diversified economy. It is also better integrated with the Asian economies from a trade and investment standpoint. Hence, China, hopefully, is in a better position to absorb the pressures arising from the trade tensions. This will minimise the negative economic impact for the rest of the region, including Malaysia.

Similarly, with our well-diversified economy and continued foreign interest in investments, we are hopeful that Malaysia is also in a better position to weather the coming economic storms.

ONG KIAN MING is the Deputy Minister of International Trade and Industry. He is the MP for Bangi, from DAP.