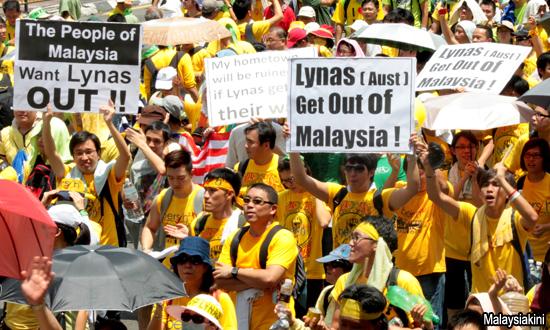 Yoursay: Don't let Lynas kick the radioactive can down the road

YOURSAY | 'Does it take five years for the pre-processing plant to be set up in Australia?'

Anonymous 770241447347646: So Lynas hears Prime Minister Dr Mahathir Mohamad and will heed his call for the first stage of processing the rare earth (which produces radioactive waste) to be done in Australia before it is sent to Malaysia for further processing. But this will only take place in five years’ time.

Meanwhile, the radioactive waste for the next five years will be produced here and kept at the Lynas plant in Kuantan. That means almost double the waste will be stored in Malaysia.

We have heard the excuse that many Malaysians are employed at their plant. This has been repeated time and again as if Lynas is doing this country a favour.

They quietly forget the millions they are making from their investments, besides the 12-year tax break they get.

They also forget to remind Malaysians the dangers the radioactive waste can do to the health of those staying around the area if it is leaked into their water system.

They keep saying it is safe, and yet their own nation wants nothing to do with it.

Well, the question is - is Mahathir heeding the voice and the cries of the people? Umno had failed to listen to what the public was telling them. Is Mahathir more interested in pleasing Lynas?

Why in five years' time? Hoping for Umno to make a comeback?

Why the need to "pre-process the material in Western Australia" then send it here? Why doesn't Australia do all the processing of the toxic rare earth, A to Z, in its own backyard?

For your information, Mashal, we do not trust Lynas "industrial best practice". Ship all the toxic waste back to Australia and dump it there.

Australia is like the US, they have such high environmental standards for their own countries and they use Third World countries like Malaysia as their dump site as well as processing their toxic rare earth here.

Shovelnose: This is just kicking the can further down the road. Your Australian masters have in the past made lots of verbal commitment without any being realised.

This is another five years of waste piling on top of the existing ones already here. The permanent disposal facility (PDF) location must be identified now, acquired and built, and Lynas must be made to bear all associated costs for it.

Annonnymous 080: Does it take five years for the pre-processing plant to be set up in Australia?

How on earth then they could get the Lynas plant up and running in Kuantan the very moment they set it up five years ago?

They were given a conditional licence to ship back the wastes but the government never meant to implement this.

"Once the new plant is operational, the material shipped to Malaysia for processing would not include naturally-occurring radioactive material," said Mashal.

Isn’t this a clear admission that currently, we have “naturally-occurring radioactive material” at the Lynas plant in Kuantan?

Cyclonus: Yes, I think five years is too long. They should be able to do it within two years (design and construct the facility).

In the meantime, Malaysia becomes a radioactive garbage dump. Of course, we have the previous regime to thank for this.

It's a pity that those who were in power and entrusted to safeguard its citizens poisoned us to enrich themselves.

Newday: Lynas will relocate processing, but not take back any of the current residues. That is only half a promise.

Toffeesturn: Talk alone is not good enough. After all, who is Lynas and who is Mashal to give Mahathir that undertaking?

Lynas must get the Australian government and the state government where the mine is located in Australia to give us an irrevocable guarantee for this.

And five years from now is too long. It has to be immediate. Clearly, this five-year plan is a delay tactic by Lynas and not real.

Before you know it, they will here for 50 years and we Malaysians will none be the wiser. If this thing is good, they will do it in Australia.

We cannot even bring fruit or milk powder into Australia. Lynas wants us to believe they will ship the waste back to Australia?

The Australians are straight-talking people. Isn’t that message clear enough?

Clever Voter: Surely, five years is a long time. It is unacceptable. Buying time while creating environmental damage would be double jeopardy. Malaysia loses this round.

Voice of a Rakyat: Malaysia doesn't need to be a player in rare earth at the expense of long-term risk of radiation. Just dismantle the plant and move it back to Australia.

Five years is too long. Immediate action to dispose of existing wastes back to Australia will show your sincerity in solving the problem.

Rupert16: What? Another five more years of producing radioactive waste and storing it here? Bloody nonsense.

Yes, we want all the existing radioactive wastes to be shipped back to Australia, regardless of whether the country wants it or not. If not, just dump it in Australian waters. Period.