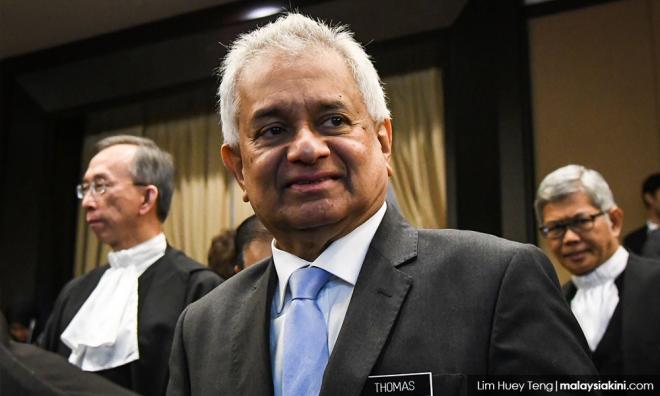 Attorney-General Tommy Thomas (photo, above) has assured the family of the late Teoh Beng Hock that ongoing investigations are not restricted to "wrongful confinement".

According to the family's lawyer Ramkarpal Singh, Thomas had told the family during a meeting yesterday that the reclassification of Teoh's death under Section 342 of the Penal Code was merely an administrative matter.

"(The attorney-general said it) does not, in any way, indicate that investigations into Teoh's death are only restricted to wrongful confinement at this stage," said Ramkarpal.

The meeting in Putrajaya yesterday was between Thomas and his two officers, and Beng Hock's siblings Lee Lan and Meng Kee. Teoh's family was represented by Ramkarpal and Sangeet Kaur Deo.

Ramkarpal said the next step was to seek a meeting with Inspector-General of Police Abdul Hamid Bador to discuss the status of investigations.

"We will continue doing what we can to ensure justice is served and hope the matter is resolved soonest," he said.

Teoh was last seen alive on July 1, 2009, when he entered the Selangor MACC headquarters for questioning and was kept overnight.

He was found dead on the fifth-floor landing the next morning and was speculated to have plunged to his death.

Ten years later, no one has been held accountable for his death.

While investigations were reopened last year, Thomas said two days ago that there was insufficient evidence to warrant culpable homicide investigations.