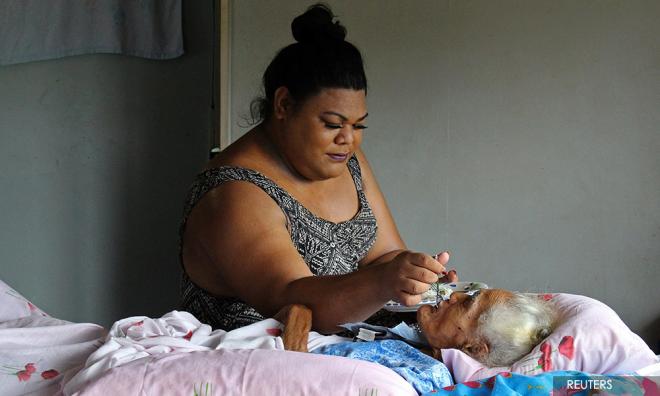 Keyonce Lee Hang is busy finishing preparations for the to’ona’i, a traditional lunch served after Sunday church in Samoa and attending to her elderly, bed-ridden grandmother.

Strongly built and wearing a floral dress and false eyelashes - and self-named after American singer Beyonce - Lee Hang can’t help but make an entrance, especially when she arrives for Sunday church in her best dress.

Genetically male, Lee Hang is a Samoan fa’afafine, a term that translates as “in the manner of a woman”.

Fa’afafine is a “third gender” in Polynesian culture, according to the Samoa Fa’afafine Association, and has been a part of island life for as long as anyone can remember. Most villages have fa’afafine, with an estimated several thousand across Samoa’s islands.

Outside the South Pacific, particularly the Polynesian islands, it is a largely misunderstood community, according to Lee Hang, who works for the government’s fisheries department.

“Western society tries to fit us [in] a box, to put us under gay, under trans and queer…but I think fa’afafine is our cultural identity - it defines us,” said Lee Hang.

Although most modern fa’afafine partner with men, the identity makes no claim about sexual orientation.

As one fa’afafine put it: “What we do in bed has nothing to do with our cultural identity.”

Samoan law criminalizes sex between men, and culturally, it isn’t acceptable for a man to wear a woman’s clothes; but the fa’afafine community can freely go outside of those boundaries.

When a boy is noticeably effeminate, he will likely be taught the traditional duties of Samoan women, which often means working within the house.

Such individuals are often said to have the “fa’afafine spirit”, though the extent and the age they express their femininity vary.

Lee Hang’s mother, Rona Tauli Lee, said Keyonce was a happy child who showed effeminate signs from age three, and who used to wear her sister’s dresses. “Keyonce is my child and I accept my children as they are,” she said.

All fa’afafine interviewed by Reuters dismissed widely reported claims that fa’afafine could be a designated role by families with lots of sons, as a substitute for a daughter.

Modern fa’afafine has won favour with large parts of the Samoan community for their hard work, especially in leading charitable causes and taking on caring roles, such as looking after the elderly.

During the Olympic-style Pacific Games held in Samoa in July, groups of fa’afafine could be seen handing out sexual health literature and condoms to athletes on the streets of Apia, Samoa’s capital.

Miriama Seeti, a markets store owner in Apia, said it was advantageous to have community members taking on culturally feminine roles with a man’s muscle. This included “carrying coconuts” and “cleaning everything inside the house”, she said.

But there are complexities in being fa’afafine in a deeply religious country like Samoa, where family and church structures are strong, said Samoa Fa’afafine Association president Alex Su’a.

“Most of us are relied on as leaders of our church denominations’ choir groups, youth groups, even the decorators and planners of activities,” said Su’a.

The relationship between fa’afafine and the church is a delicate one and can at times become tense, said Su’a.

Reverend Vavatau Taufao said fa’afafine were welcomed into the church and that many contributed to their congregations.

He said the church, however, considered fa’afafine to be male and the church didn’t endorse same-sex relationships.

Taufao, who is general secretary of the Congregation Christian Church in Samoa, said that fa’afafine used to more regularly partner with women, wore more neutral clothing, and undertook traditional chores associated with both men and women.

“Before we saw our fa’afafine wearing the same clothes as our men - now they are wearing more female dress,” he said.

After preparing lunch, which includes taro, crab, chop suey and pork, Lee Hang changes out of a black and white dress into a floral church outfit, with red flower patterns.

Lee Hang is running more than 30 minutes late for church, located directly across the road from the family home on a coastal road on the island of Upolu.

“Don’t worry,” said Lee Hang’s fa’afafine friend, Vaito’a Toelupe, peering across the road where a large congregation sits, most dressed in conservative white, and the women in hats.