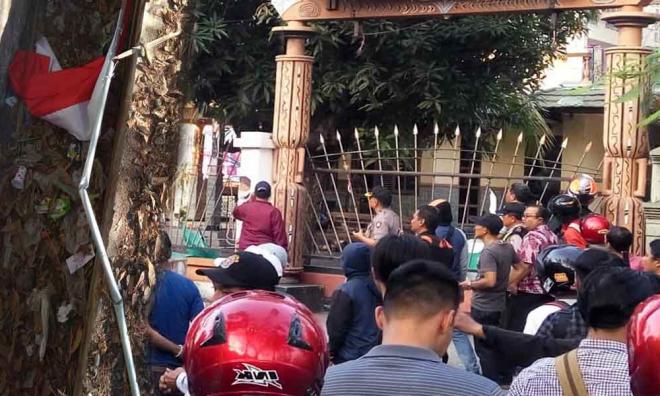 Protesters in Indonesia's easternmost province of Papua set fire to tyres and torched a local parliament building on Monday after a demonstration against the recent detention of scores of Papuan students, according to media reports and an official.

A separatist movement has simmered for decades in Papua, while there have also been frequent complaints of rights abuses by Indonesian security forces.

The spark for the latest anger appears to have been the detention of scores of Papuan students in Surabaya, East Java, for bending a flagpole in front of a dormitory during the celebration of Indonesia's Independence Day on Aug 17, according to Papuan activists.

Police fired tear gas into the dormitory before arresting 43, with officers calling the students "monkeys" during the operation, Albert Mungguar, one of the activists said at a news conference on Sunday.

"The city centre, market, the port are next to the parliament building, as well as shopping centres. Everything's affected. Practically, the whole city is not running, if not to say completely paralysed," Lakotani told Kompas TV.

Television footage showed a group of about 150 people marching on the streets in Manokwari, as well as footage of smoke billowing from a parliament building.

Papua governor Lukas Enembe said Papuans were angry because of "the extremely racist words by East Java people, the police and military", he told broadcaster TVone.

"Negotiations and communication are ongoing. Generally, the situation is under control," Prasetyo, who is based in Jakarta, said by text message.

A separate, peaceful protest of about 500 people was also underway in the town of Jayapura, the capital of Papua province, Papua police spokesperson Ahmad Kamal said by phone.

The Papua and West Papua provinces, the resource-rich western part of the New Guinea island, makes up a former Dutch colony that was incorporated into Indonesia after a widely criticized UN-backed referendum in 1969.