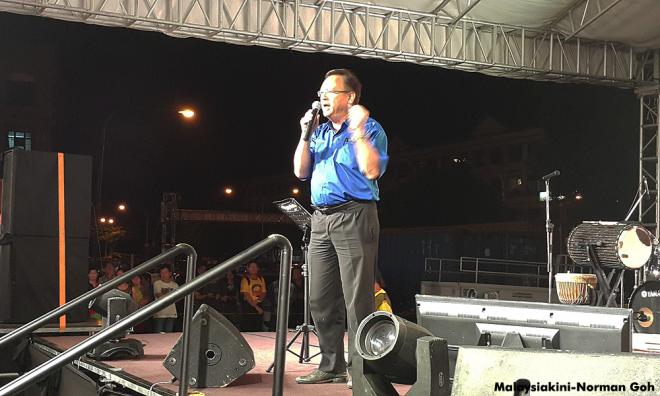 A DAP Youth division chief has rapped Batu Kitang assemblyperson Lo Khere Chiang (above) for issuing a challenge to Prime Minister Dr Mahathir Mohamad to hold a referendum on Sarawak’s position in Malaysia.

Serian Youth chief Brolin Nicholsion said in a statement today that the call by Lo during the Sarawak legislative assembly sitting two days ago was “childish” and only served to divide the country.

“That kind of speech, to me, can fall under the Sedition Act as he (Lo) breached a consensus that has been made by our forefathers to form the Federation of Malaysia," he said.

“Lo should remember that such remarks only worsen the country and divide us as we are in progress of rebuilding a strong country.”

Nicholsion, who is also special officer to DAP Padungan assemblyperson Wong King Wei, further opined that Sarawak was not ready to secede from Malaysia in terms of human capital index and military power.

“What about those corruption allegations toward our Sarawak leaders?” he questioned. Instead, he challenged Lo’s party GPS to repeat the challenge directly to the prime minister in the Dewan Rakyat.

“Has the GPS many MPs in Parliament? Even their party’s deputy president is an MP," said Nicholsion, adding that Lo should "stop dividing our country".

“You (Lo) speak in the state assembly but your voice is not powerful and it is just like a toothless tiger. You are an ordinary backbencher and the other parties in your coalition are not backing you," he said.

“Let’s focus on rebuilding Malaysia so that we will have a strong nation for our future generation. Stop dividing our country."

Lo made the call in the assembly on Wednesday when debating the state budget. He was referring to Dr Mahathir’s statement at the UN General Assembly in New York in 2018 where he reportedly remarked that Sarawak and Sabah did not wish for independence from Malaysia.

In his speech, Lo called on the premier to “let Sarawak decide”.

“I challenge Dr Mahathir to give us a referendum to determine whether Sarawakians want independence or not,” his speech, sighted by Malaysiakini, had read.

In July, Dr Mahathir told the Dewan Rakyat that Putrajaya could use the Sedition Act against attempts to get Sarawak to secede from Malaysia.

However, the premier said the Act would only be employed in extreme cases in respect to freedom of speech and where such calls jeopardise national security and public order.