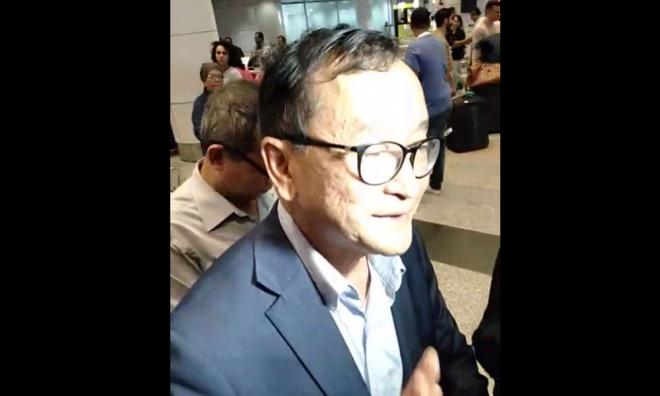 Nurul invites Rainsy to meet MPs; Putrajaya praised for not barring him

This was after Rainsy (above), who has been exile and plans to return to Cambodia via Thailand, was turned away by Bangkok.

"Malaysia deserves kudos from around the globe for permitting Cambodian opposition leader Sam Rainsy to enter the country and meet with his colleagues.

"Respecting basic human rights is not hard, it simply requires the kind of political commitment that Malaysia has shown today.

"In marked contrast to Thailand's repressive crackdown on the Cambodian exiles, Malaysia has shown there is another, more rights-respecting way to proceed," said HRW deputy Asia director Phil Robertson.

Cambodian Prime Minister Hun Sen, who has been in power for more than 20 years, has accused opposition leaders who are planning to return to the country of wanting to stage a coup.

Rainsy founded the Cambodian National Rescue Party (CNRP) which has been banned.

CNRP vice president Mu Socha and two of her party colleagues were briefly detained by Malaysian immigration on Thursday after arriving in Malaysia.

Malaysia refused to handover Mu to Cambodian authorities but Prime Minister Dr Mahathir Mohamad indicated that he wants them to find another country as Putrajaya did not want to get involved in the politics of another nation.

Seng, who shared a letter of the invitation, said the meeting will discuss various socio-development methods and the best way to pursue them

Rainsy, like Nurul Izzah's father Anwar Ibrahim, was formerly a finance minister before a falling out with the ruling party and joining the opposition.