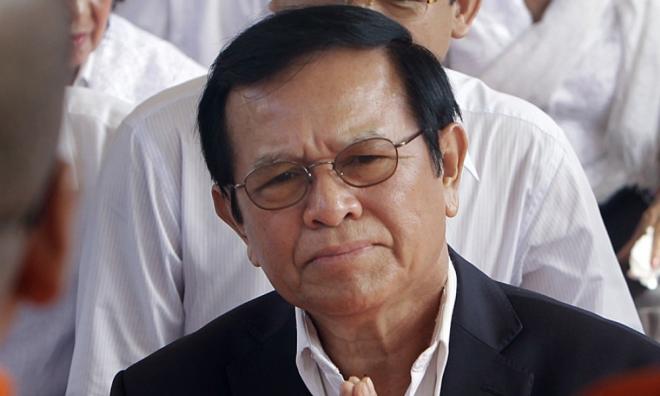 Cambodia freed opposition leader Kem Sokha (above) from house arrest on Sunday, more than two years after he was arrested and charged with treason, but the charges remain and he is banned from politics and from leaving the country.

The easing of restrictions comes a day after Sam Rainsy, a co-founder of their now-banned opposition party, flew into the region from self-imposed exile, saying he aimed to return home to rally opponents of authoritarian ruler Hun Sen.

Cambodia has been under pressure to soften a political crackdown as the European Union considers whether to go ahead with potentially damaging cuts to trade preferences.

The Phnom Penh Municipal Court said in a statement that Kem Sokha could leave his house, but that he could not engage in political activity or leave the country.

“He can travel anywhere, but can’t leave Cambodia,” Justice Ministry spokesman Chin Malin told Reuters. “This is because he has been cooperative with the authorities.”

Kem Sokha, 66, was arrested in 2017, and the Cambodia National Rescue Party (CNRP) was banned in the run-up to a general election last year that Hun Sen’s ruling party then swept, but which was condemned as a farce by Western countries.

“This is a first step and we continue to call for the dropping of all charges against him and the reinstatement of his political rights. We hope more positive developments will be coming soon,” Kem Sokha’s daughter, Monovithya Kem, a CNRP official, told Reuters.

Kem Sokha was accused of plotting with foreigners to oust Hun Sen (below) - a charge he dismissed as nonsense.

Hun Sen, 67, a former Khmer Rouge commander, has ruled the country of 16 million for more than 34 years with an iron hand and a wily ability to play off his opponents against each other and sow division among them.

Teddy Baguilat of the Association of Southeast Asian Nations (Asean) Parliamentarians for Human Rights group said the easing of restrictions on Kem Sokha should be seen as an attempt to ward off international sanctions.

“This is just another cynical move by Hun Sen to try and hoodwink the international community into thinking he is lifting his grip on the political opposition,” he said.

Fellow opposition figure Sam Rainsy, 70, flew into Malaysia on Saturday and told supporters to “keep up the hope” after promising to return home with other exiled opposition leaders to challenge Hun Sen.

Sam Rainsy (below) had said originally he planned to cross to Cambodia from Thailand on Saturday, but he was refused permission to board a Thai Airways plane from Paris on Thursday.

In the weeks since Sam Rainsy announced his plan to return, some 50 opposition activists have been arrested in Cambodia.

In Malaysia, Sam Rainsy was meeting officials to discuss strategy on Sunday. CNRP officials there said they had no immediate comment on the easing of restrictions on Kem Sokha.

Cambodia’s government said there was no ban on Sam Rainsy returning, but it described him as “convict Sam Rainsy” and said it would take action against anyone posing a threat to state security - an accusation it has laid against him.

Sam Rainsy fled to Paris in 2015 after a conviction for criminal defamation and faces a five-year sentence in a separate case - charges he says were politically motivated.

It was only when Kem Sokha and Sam Rainsy brought together rival opposition factions ahead of elections in 2013 that they posed a serious electoral threat to Hun Sen’s Cambodian People’s Party (CPP).

Because of the crackdown on Cambodia’s opposition, the European Union has begun a process to reconsider trade preferences granted under an “Everything But Arms” (EBA) trade programme for least-developed countries.

The EU accounts for more than one-third of Cambodia’s exports, including garments, footwear and bicycles.

world
cambodia
hun sen
kem sokha
cambodia national rescue party
Related Reports
Nurul invites Rainsy to meet MPs; Putrajaya praised for not barring him
a year ago
Why were the three Cambodian opposition activists detained?
a year ago
Detained Cambodian Mu Sochua was travelling on US passport - Saifuddin
a year ago
US decries Cambodia's crackdown on political opposition
a year ago