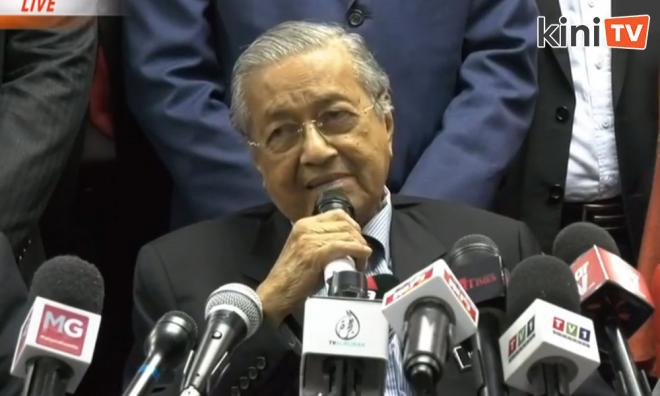 1. Prime Minister Dr Mahathir Mohamad said a cabinet reshuffle is being considered, and may even take place before Malaysia hosts the Asia-Pacific Economic Cooperation (Apec) summit in November next year.

2. PKR Youth deputy chief Hilman Idham insisted that the party’s deputy president Azmin Ali would officiate the wing’s annual congress, claiming that he has the support of 132 out of the 196 divisional youth chiefs.

3. Sarawak PKR chief Baru Bian claimed there had been attempts to turn party division chiefs in the state against him, through bribery.

4. The High Court in Kuala Lumpur heard testimony on how 1MDB executives and figures linked to former prime minister Najib Abdul Razak conspired to alter the 1MDB audit report and destroy all other versions of the report.

5. The police have sent a sex tape that purportedly implicated Azmin, who is economics minister, to digital forensics experts in the US for analysis, which is expected to be completed by the end of the year.

6. A group of Universiti Putra Malaysia students are demanding that the Education Ministry explains its alleged intervention that led to a talk featuring PAS president Addul Hadi Awang being postponed, but the university said the students were asked to find a “suitable counterpart” from the government to be featured in the event.

7. The Civil Aviation Authority of Malaysia said a test flight of a flying car slated for today has not received clearance to fly, and it is investigating an unauthorised test flight on Nov 15.

8. The Health Ministry is looking for ways to reform private health insurance, which is plagued by rising premiums and low payout rates.

9. Umno MPs Ismail Mohamed Said and Tajuddin Abdul Rahman engaged in a war of words in the lobby of Parliament over a photograph the Tajuddin had circulated, but the two later kissed and made up.

10. Parents play a key role at a high-performing school in rural Sarawak, where they not only donate to the Parent-Teacher Association, but also teach and participate in school activities.