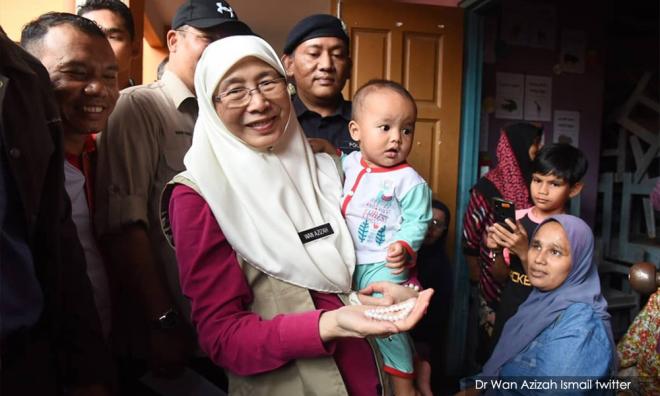 The government is willing to consider flood mitigation measures in Kelantan and Terengganu although it requires a large allocation.

“We want to solve the problem (floods) if possible we will do flood mitigation. We will look at the overall picture... we know that it will be very costly.

“It is estimated that at Sungai Golok the costs will come up to RM700 million and here (in Besut) alone it will be RM400 million. So this is not something that is simple and easy to handle. But the government will work towards it,” she said when met by reporters after visiting flood evacuees housed at the temporary relief centre in Sekolah Kebangsaan Seri Payong, Jerteh, Terengganu, today.

The relief centre has been housing 162 evacuees from 36 families over the past five days.

Wan Azizah added that it was time for the government to take the initiative to ensure that the same thing does not recur and a detailed study would be carried out taking into account various factors including the terrain and the environment.

For a start, mobile toilets would be placed at relief centres and that is to prevent toilet damage the school has to bear, but the large number of evacuees would make it difficult to control the level of cleanliness.

She also emphasised that the well-being of women should be taken care of, especially of those who are still in confinement and need to breastfeed, by providing them with space.

Regarding the management of flood evacuees in the two states, she said the staff showed high dedication and performed tasks in an orderly and organised manner.

Although there were some minor issues such as insufficient supplies of essential goods in Kelantan, it was resolved by the parties concerned.

In the meantime, Wan Azizah expressed condolences to the families of two flood victims who died in Kelantan yesterday.

“I would like to express my condolences to the family of the seven-year-old who slipped and drowned while placing fishing nets with his uncle in Felcra Teratak Batu near Pasir Putih, Kelantan.

“I was informed of another case of drowning in a flooded padi field in Tumpat, Kelantan… we have to try and prevent such tragedies... besides, keep up to date with the latest flood reports and always keep yourself and the family safe,” she said.

The body of Eh Phong Areang, 49, was found at 11.30am yesterday by villagers after slipping while lifting nets in Kampung Jubakar, Tumpat.

Earlier, the body of Muhammad Eilham Hasmadi was also found at 8.00am yesterday, about 400 meters from where he fell at Felcra Teratak Batu, Pasir Putih.