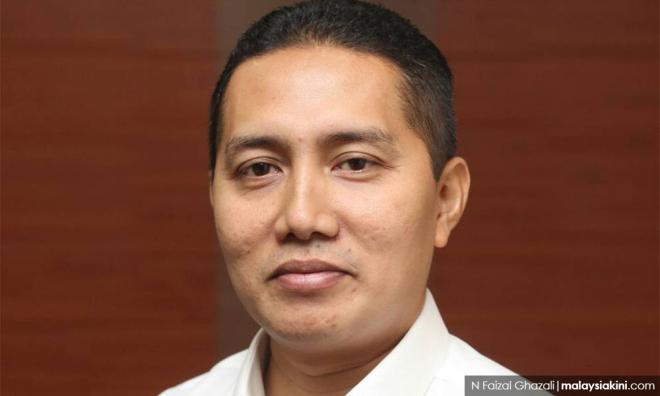 There is now an internal push within Umno to get supreme council member Lokman Noor Adam sacked from the party.

This is after he lashed out at party leaders after a disciplinary complaint filed against Umno's Sembrong MP Hishammuddin Hussein was scuttled.

Kelantan Umno Youth chief Noor Hariri Mohamed Noor (above) today made an open call for the party to dismiss Lokman.

"The sacking is reasonable as this is not the first time Lokman had made accusations against the institution of the president as well as personal and disgusting accusations and slander against other top Umno leaders.

"The sacking is necessary to serve as a lesson to other Umno members and to defend the honour of the institution of the Umno president from attacks within the party from parasites like Lokman Adam," he said in a statement today.

Following Lokman's complaint, Hishammuddin was slapped with a show-cause letter and asked to appear before the disciplinary board on Dec 26.

However, the disciplinary hearing did not materialise, which prompted its board chairperson Mohamed Apandi Ali to resign.

Lokman claimed Umno president Ahmad Zahid Hamidi had scuttled the hearing and insinuated that there were behind the scenes horse-trading with the ruling coalition.

The disciplinary complaint against Hishammuddin was over allegations that he had facilitated the defection of Umno MPs to Bersatu as well as his role in organising a meeting of Umno MPs with Economic Affairs Minister Mohamed Azmin Ali, who is also the PKR deputy president.

Noor Hariri said Lokman had accused Ahmad Zahid of bowing to Prime Minister Dr Mahathir Mohamad, who is also the Bersatu chairperson, in order to escape the 87 graft charges he is facing in court.

He also noted that Lokman had accused Umno secretary-general Annuar Musa of lying when the latter downplayed Apandi's resignation.

He stressed that the allegations were untrue and Lokman must be disciplined for making such claims.

"His actions can no longer be left alone. If not addressed, it will damage the party.

"Johor Umno Youth calls for stern action against Lokman by sacking him as a supreme council member as well as an ordinary member," he said.

Mohd Hairi said Lokman could have voiced his views through the proper party channels.

"As an Umno supreme council member, he should not have issued statements that can expose the party to attacks from enemies.

"As a senior leader, he needs to show maturity and leadership instead of launching baseless attacks against the party leaders like an immature child," he said.